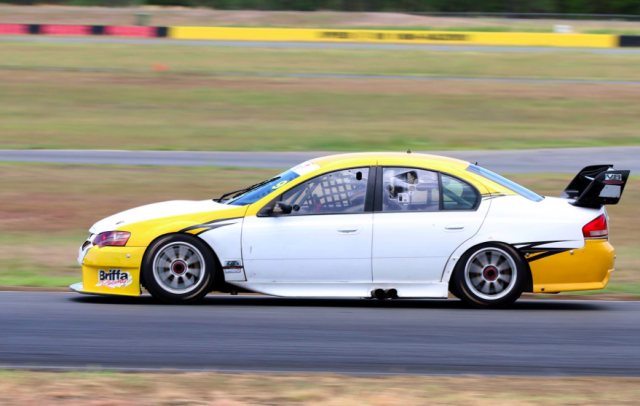 Aaron Seton is eyeing a switch to the Kumho V8 Touring Car Series following a successful maiden run in a Supercar at Queensland Raceway.

The son of two-time Supercars champion Glenn Seton jumped behind the wheel of a Ford BF Falcon, owned by Rod Dawson, at the Ipswich venue.

Seton is eager to join the third-tier category as he looks to follow in the footsteps of his father by forging a career in the Virgin Australia Supercars Championship.

The 18-year-old felt comfortable at the wheel of Supercar machinery for the first time which has further boosted his ambition to compete in the category.

Seton says a campaign in the series, utilising the BF Falcon, is dependent on raising sponsorship, admitting it is unlikely he will make the first round at Phillip Island from April 21-23.

“I’m not sure if we will be on the (Kumho V8) grid at the moment but we are trying to find some money and hopefully we can,” Seton told Speedcafe.com.

“Kumho V8s is a great step towards Supercars which is ultimate goal.

“It was awesome to drive a Supercar for the first time and to gain experience in a new car.

“To be able to drive what I want to create a career in was really good and that test has got me a step closer to achieving that.

“The car was great. It took a couple of sessions but I felt really comfortable in the car and I really enjoyed it.”

Glenn Seton was present at the test where he enjoyed a brief run out in the car before handing over to his son.

Seton Jr. says his father’s experience will be beneficial if a Kumho V8 campaign comes to fruition.

“If we do the series it would be great to have dad there for support as he has done it all before,” he added.