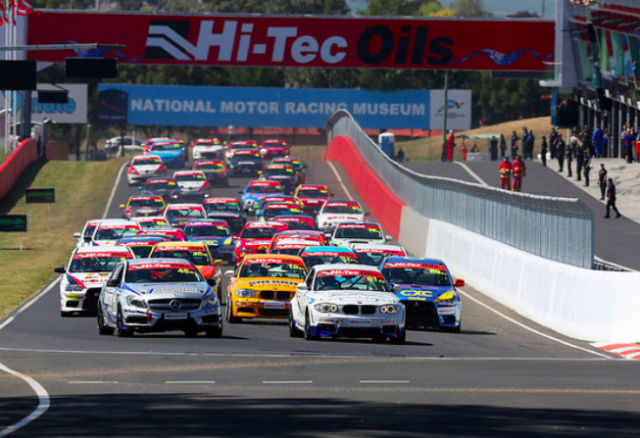 A bumper grid will tackle the Bathurst 6 Hour

Bathurst 6 Hour organisers are predicting a record Mount Panorama grid for this year’s edition of the popular production car enduro.

A mammoth 66 entries spread over seven classes have been received for the event held over the Easter weekend from April 14-16.

The bumper Bathurst grid represents a significant increase from the 50-car field at last year’s inaugural Hi-Tec Oils Bathurst 6 Hour, won by the BMW 335i of Nathan Morcom and Chaz Mostert.

This year’s entry is set to eclipse the highest ever entry for an endurance race at the 6.2km circuit which stands at 63 cars.

Larger fields have attempted to qualify or start the race with 70 cars attempting to qualify for the 1971 Hardie Ferodo 500, through only 61 of them made the actual race start.

While 66 cars, the same as this year’s Bathurst 6 Hour entry, assembled at Mount Panorama in 1966 however 60 managed to make the start.

“Whilst we would be delighted to set a record grid for an endurance race at Mount Panorama, the massive growth of the field is the most pleasing aspect,” said event director James O’Brien.

“The reaction from Production Car competitors has been outstanding they have quickly embraced this chance to compete for their own Bathurst victory.”

The Bathurst 6 Hour will represent 17 manufacturers on the grid with the top A1 class (Extreme Performance/Forced Induction) set to be the most hotly contested with 22 entries.

The 14 entries in Class D include two class E entries that will be amalgamated into the higher category, with three cars the minimum for a stand-alone class.