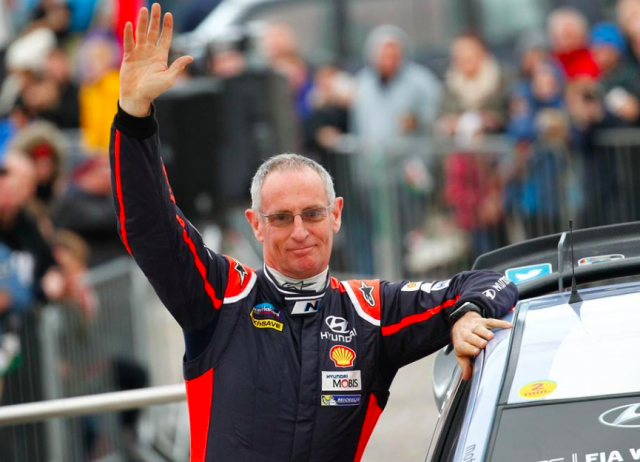 World Rally Championship star Hayden Paddon will team up with a new co-driver later this year following the announcement that John Kennard will step down from the role.

Kennard has partnered Paddon during a 12-year period that has seen the pair rise up the ranks to rallying’s top tier.

The experienced co-driver has confirmed his last WRC rally alongside Paddon in the factory Hyundai i20 will be Rally Finland in July.

Paddon’s new co-driver will be announced in the coming days.

The pair became the first New Zealanders to claim a world rally title by winning the 2011 Production World Rally Championship.

Paddon and Kennard went on to win a full WRC event in Argentina last year.

Kennard competed in New Zealand as a driver back in the late ‘70s, but moved to the co-driver’s seat in 1985, claiming his first WRC podium alongside Kiwi driver Malcolm Stewart at Rally New Zealand in 1988.

He also worked for WRC teams, firstly as team co-ordinator for Mitsubishi Japan, a similar role with Prodrive’s Subaru World Rally Team and then a year managing Mitsubishi’s rally programme in USA.

The introduction to Paddon in 2005 brought Kennard back into the sport competitively.

Together, Paddon and Kennard won the New Zealand Rally Championship in 2008 and 2009.

Four straight PWRC wins secured the 2011 championship title for the Kiwis – a history-making achievement in New Zealand motorsport as the first Asia-Pacific driver/co-driver combination to ever win a world rally championship title.

“After 12 years as Hayden’s co-driver, it will be hard to lever myself out of that Hyundai i20 Coupe WRC seat for the last time,” said Kennard.

“But our deal has always been that I help Hayden in the most effective way possible and to have been his co-driver for so long, has been incredibly fulfilling and rewarding.

“When we first got in a car together, in 2006, the dream of winning the WRC seemed so far away.

“But now, as we push to achieve that ultimate goal, it’s timely that we re-arrange roles for maximum effect and to help complete the quest we’re all on – to bring the WRC Championship trophy home to New Zealand.”

Reflecting on their time together, Paddon admits Kennard has been influential in his rise up the rallying ranks.

“Obviously, John has played a huge part in my career since we started working together at the end of 2005,” said Paddon.

“We have achieved so much together and it has been quite a journey of highs and lows.

“It’s certainly sad to end the partnership, but we have been discussing over the last couple of years when was the best for both of us to make the transition with an eye towards the future.

“I can’t thank John enough for everything he’s contributed in these 12 years, but this is not the end.

“He will stay involved, helping me behind the scenes and, as he has played an important part in the journey so far, it’s only natural that he remains a part of it.”