Truex Jr. wins as fight breaks out in Las Vegas

Truex Jr. wins as fight breaks out in Las Vegas 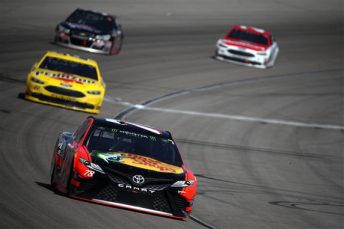 Martin Truex Jr. has passed Brad Keselowski with two laps remaining to win the Kobalt 400 at Las Vegas Motor Speedway, but it was a post race fight between Kyle Busch and Joey Logano that will be remembered .

Truex had in fact dominated the race, winning the first two points paying stages on his way to leading 150 of the 250 laps.

Then on the run to the chequered flag with 24 laps remaining his car went away and last week’s winner in Atlanta Brad Keselowski went to the front.

A caution with 16 laps to run for a blown engine to Danica Patrick set up a nine-lap race to the finish. Keselowski pulled out to lead, but then he broke something in the front right and Truex went back out front to the finish.

“It was a gift at the end, but we have been on the other side of those plenty of times and the first one to come our way,” said Truex Jr who scored his eighth career win and fifth in the last 27 races.

“We made a lot of changes last night and I said let’s go for it.

“It’s still hard and it’s still tough and you still rive your but off every single lap. I felt that we had to go long on the last set of tyres and Brad was good on the long run all day. We had to stretch it and we got a little bit lucky and you fight all the way to the end.” 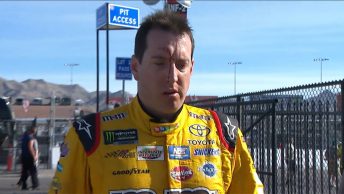 Kyle Busch after the fight on pit road

Keselwoski’s issues saw him back-up and on the last lap he was caught by his Penske team-mate Joey Logano and Kyle Busch. Logano and Busch made contact in the final corner and, with the Toyota driver finishing the race sideway down the pit road.

That wasn’t the end of matters with Busch approaching Logano after the race and a melee ensued with pit crews getting involved. Busch walking away with a cut on his forehead.

The major incident on the day came involved when points leader coming into the Las Vegas race, Kevin Harvick, had a right-front tyre let go and he made heavy contact with the outside wall.