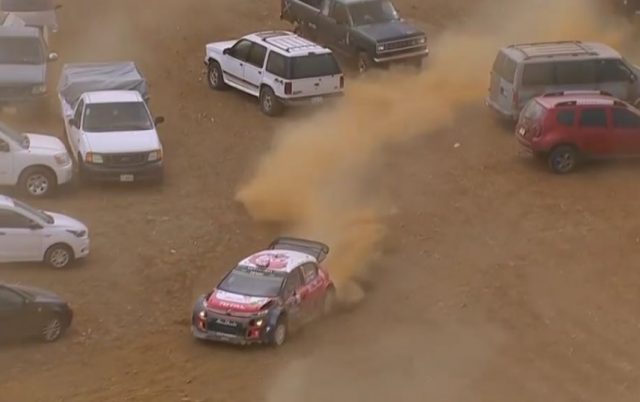 Meeke guides his way through the car park

Kris Meeke has taken what turned out to be a dramatic Rally Mexico victory after flying off the road, through a car park and then back onto the stage just hundreds of metres from the finish.

The Citroen driver had built a 37-second lead heading into the final TV Power Stage when he hit a bump which sent the car through a hedge and into a car parking area for spectators.

He was fortunate on many levels, as he clipped the back of a parked car and landed in a section that had no other vehicles.

The Northern Irishman then appeared to look lost as he navigated his way through other parked cars and re-joined the stage with a puncture.

He went onto complete the stage 23-sec down, but crucially 13.8-sec in front in the overall standings from Sebastien Ogier.

“OK it’s certainly one way to finish a rally, but we are through.

“To have to find my way through the parked cars and then through the hedge. A lot things went my way.”

Meeke’s win means three different drivers along with Ogier, Jari-Matti Latvala and three different manufacturers in Ford, Toyota and Citroen have won the opening three rounds of the 2017 WRC.

Ogier’s second place finish in the event and on the power stage was enough to put the Ford driver back at the head of the points standings by 12 points from Jari-Matti Latvala.

Thierry Neuville claimed the Power Stage and also third overall. After leading, but crashing at both Monte Carlo and Sweden, the Belgian was satisfied with his result. 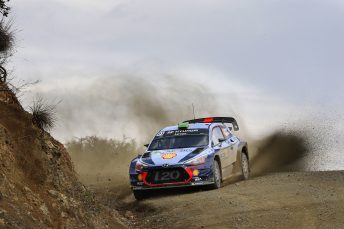 Fourth place went to Ott Tanak claimed fourth ahead of Kiwi Hayden Paddon in a Hyandai.

“There’s not much to say about this rally, in which we had some problems,” said Paddon.

“We can only take consolation from a top-five finish, but with some more luck we know we can be fighting higher up – and for the podium.

“It’s been good to be back on gravel, it’s just unfortunate that we couldn’t show a better performance. We can only keep on working in the hope that the tide will turn soon. Corsica is next, where I’m hopeful we can get better results.”

The next event of the WRC is the Tour de Corse on the Island of Corsica on 7-9 April.