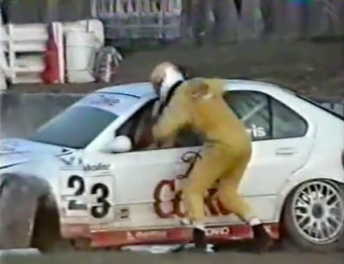 Longhurst was involved in one of Australian sport’s most famous ‘punching’ incidents when he clobbered team-mate Paul Morris through the open window of his Super Touring BMW at Winton in 1994.

To this day, the crash and subsequent punch-up has been highlighted on sports blooper tapes around the world and stands as a timeless billboard for Benson and Hedges and Diet Coke who were the sponsors on the cars of Longhurst and Morris that day.

NASCAR produces at least one or two controversial physical incidents between drivers and crews each year and Longhurst is convinced it does the sport more good than harm.

Australia’s own Marcos Ambrose was involved in his own post-race NASCAR fight with Casey Mears at Richmond in 2014.

“Motorsport is a passionate business and I think it is important that the fans get to see that emotion,” Longhurst, told Speedcafe.com.

“My incident with Paul (Morris) was all pure emotion.

“It probably wasn’t the best thing to happen at the time, but it is amazing how many people talk to me about that incident all these years later.

“They don’t necessarily remember my wins at Bathurst or other things we achieved, but I can assure you they remember that crash at Winton and they like to remind me that Paul (Morris) still had his helmet on at the time.

“I am sure Marcos (Ambrose) doesn’t regret landing that right hander on the head of Casey Mears after he pushed him in pit lane. It was a pretty good right hook.”

The two-time Supercheap Bathurst 1000 winner officially retired from active motorsport after this year’s Bathurst 12-hour where he was back in a BMW with fellow Bathurst winners Mark Skaife and Russell Ingall.

“The 12-hour brought our a whole range of emotions for us because there was just so much work and effort that went into that program,” said Longhurst.

“Obviously, you always have commercial considerations, but if we had been in a position where we believe someone had deliberately taken us out of that race, then I think the emotions would have flowed pretty quickly and the gloves could have been off.”

While Longhurst believes that more emotion should be encouraged in the Supercar paddock, he admits that his fighting days are behind him.

“Kyle Busch was obviously upset and I think him and (Joey) Logano have a bit of history so it did not take much to set him off,” said Longhurst.

“I don’t think I would like to be on the receiving end of punches from one of those NASCAR boys, but one thing is for sure – NASCAR was on every highlights show around the world tonight.

“Maybe that’s something that Supercars need to have a good hard think about.

“I am not saying you need to set up a boxing ring in pit lane, but I think these (Supercar) boys need to be let off the leash every now and again and get emotional without the threat of a massive fine or penalty hanging over their head.

“Supercars made a point of telling all the drivers a few years ago that they were being ‘encouraged’ to get more emotional, but I think that lasted a couple of weeks.”

Next Story Triple Eight closing in on SVG chassis fix