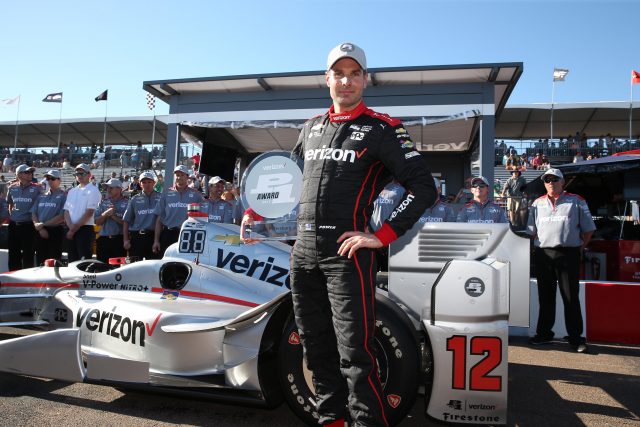 Will Power continued his love affair with the streets of St Petersburg by recording his seventh pole position in eight years for the Firestone Grand Prix in Florida.

Recovering from a practice one crash on Friday, the Toowoomba native snatched pole in the dying moments of qualifying with a lap of 1:o1.06s (106.118 mph) effort.

The lap sealed his 45th career IndyCar pole, which places him fifth on the all-time list.

The 2014 Verizon IndyCar Series champion will look for his third win at the circuit tomorrow.

“It takes obviously a very good team and kind of getting through that first round there,” said Power, whose lone lap in the opening of three knockout qualifying segments was quick enough to advance while also saving his Firestone alternate tyres for the final round, the Firestone Fast Six.

“Definitely had a good moment on the tyres in the last round there, so I’m very happy to be on pole.”

Chip Ganassi Racing’s Scott Dixon appeared to be the driver to beat for the majority of the weekend, leading second practice Friday and this morning’s session, where he posted a lap of 1:01.6240 (105.154 mph) to join Power on the front row.

Dixon also paced the first two segments of qualifying, but admitted a mistake on his flying lap of the Firestone Fast Six ended his chances at the Verizon P1 Award.

“Honestly, I think the team and Honda did the job, I just did not,” said Dixon.

“Came up short, made a pretty big mistake on my fast lap, which definitely disappointed me.

“We’ve had a pretty smooth weekend, the car’s super-fast but came up short. But it’s qualifying, hopefully tomorrow I can redeem myself and maybe snap up an extra spot.”

The Kiwi has finished runner-up at St. Pete on three occasions, but has yet to find victory lane at the circuit, where he will make his 13th start tomorrow.

Also achieving his best qualifying position at the track was Josef Newgarden (#2 Verizon Chevrolet), who will start his first race for Team Penske from the outside of row two.

Andretti Autosport’s Takuma Sato amended for a rough Friday, which saw him tag the Turn 13 barrier in practice, by qualifying his #26 Andretti Autosport Honda in the top five in his debut with the team.

While Sato rejoiced in a successful qualifying, team-mate Marco Andretti and defending series champion Simon Pagenaud found frustration. Neither advanced from Segment 1, despite both showing speed in the weekend’s practice sessions.

There will be a 30 minute warm-up tomorrow morning shown on racecontrol.indycar.com. The race coverage starts at 3am Australian Eastern Daylight Savings Time on ESPN.