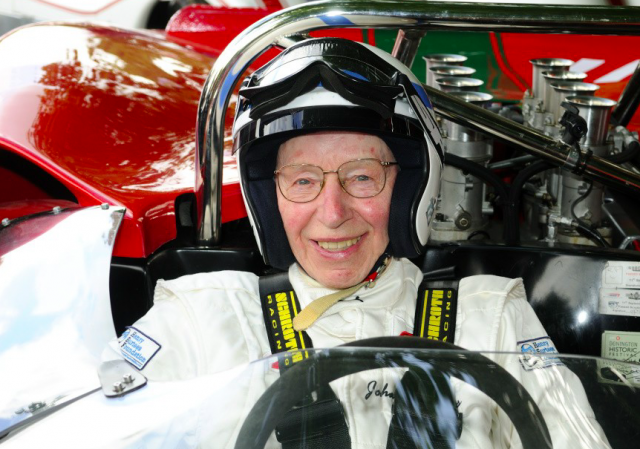 John Surtees, the only man to win world titles on two and four wheels, has died aged 83 in London.

Surtees was admitted to hospital in February with an existing respiratory condition. He died peacefully on Friday.

The Brit was one of motor racing’s pioneers winning seven motorcycle world championship before moving into Formula 1 where he lifted the world title in 1964 for Ferrari.

Wining world titles on two and four wheel remains a feat that is yet to be repeated.

The Surtees family released a statement on Friday describing Surtees as one of the ‘true greats’ of motor racing.

“It is with great sadness that we announce the death of our husband and father, John Surtees CBE,” read the statement.

“John was a loving husband, father, brother and friend. He was also one of the true greats of motorsport and continued to work tirelessly up until recently with The Henry Surtees Foundation and Buckmore Park Kart Circuit.

“We deeply mourn the loss of such an incredible, kind and loving man as well as celebrate his amazing life.

“He has set a very real example of someone who kept pushing himself at his peak and one who continued fighting until the very end.

“We would like to thank all the staff at St George’s Hospital and The East Surrey Hospital for their professionalism and support during this difficult time for us.

“Thank you also to all of those who have sent their kind messages in recent weeks.”

Surtees began his career on two wheels where he became one of the big names during the 1950s.

Alongside his seven world titles riding for British outfit Norton and the famous Italian marque MV Agusta, he triumphed six-times in the notorious Isle of Man TT.

On two wheels he took 38 race wins from 51 races before switching to cars, making his debut for Lotus in the same as year as his final two-wheels title in 1960.

It would be just four years later that he won the F1 world title which included a remarkable win at the Nurburgring and another victory at Monza.

His world title in F1 was notable as he beat Graham Hill and Jim Clark into second and third places. During the 12 years he raced in the category he won six races from 111 starts. He also took a third place for Ferrari at Le Mans in 1964.

After a falling out with management he left Ferrari in 1966, the same year he won the CanAm Championship in a Team Surtees Lola; again notable for the level of competition in a field that included Bruce McLaren, Dan Gurney and Phil Hill.

He will also be remembered for fielding his own F1 team from 1970 to 1978, which included Australian drivers Alan Jones, Larry Perkins, Vern Schuppen and Tim Schenken.

Surtees was involved with the Team GB entry in the A1 Grand Prix series from 2005 to 2007 and played a part in assisting his late son Henry into the sport.

Henry was tragically killed in a freak accident in a Formula 2 Race at Brands Hatch when he was struck on the head by a loose wheel from Jack Clarke who had crashed. He was only 18 years of age.

Tributes have flowed from the motorsport fraternity in recognition of Surtees’ contribution to the sport.

Lewis Hamilton said: “I just heard about John Surtees. To end the day with that kind of news is very sad. He was a legend of the sport – a lovely guy who did so much. It’s a shock to everyone. My thoughts and prayers go out to his family.”

Ferrari also acknowledged the part he had played for the scuderia, tweeting: “John Surtees, Motorsport legend and 1964 World Champion with Ferrari, passed away. Our thoughts are with his family.”

Jenson Button posted: “Today we lost one of the all time greats on two and four wheels. We will miss you John… ripjohnsurtees.”

“One of the few who has given much more back to our sport than has ever taken. A true gent and racer. RIP John Surtees, said Sportscar ace Darren Turner.

“Very sad, can’t believe it John. You had been so supportive of me all along! My thoughts are with your family. REST IN PEACE,” said reigning F1 world champion Nico Rosberg.

“Our thoughts are with John Surtees’s family, a talent who achieved something not likely to ever be repeated. A legend.” said FIA president Jean Todt.