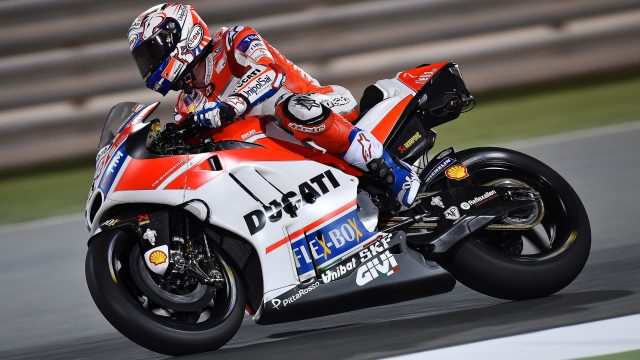 Andrea Dovizioso has set the fastest lap as Marc Marquez crashed twice on the first day of MotoGP’s final pre-season test at Qatar.

The factory Ducati rider lapped the Losail Circuit with a best time of 1:54.819s, finishing the night over 0.3sec faster than the star of the 2017 pre-season, Maverick Vinales.

Dovizioso went fastest with just over two hours remaining, taking away the ascendancy from new teammate Jorge Lorenzo on a circuit which was expected to suit the powerful Ducatis.

New Movistar Yamaha recruit Vinales continued his strong testing form in finishing second, while LCR’s Cal Crutchlow was the first of the Hondas in third.

Karel Abraham was a surprise fourth for Aspar Ducati and Lorenzo ultimately finished fifth, ahead of MotoGP debutante Jonas Folger for Tech 3 Yamaha.

Marc Marquez crashed twice on his way to twelfth, midway through the seven-hour session and again in the final hour.

The defending world champion had been testing a new fairing during the first of those crashes as Repsol Honda fashions a replacement for the now-banned winglets.

Jack Miller finished 14th on his Marc VDS Honda, seven positions off teammate Tito Rabat, who sat out the Phillip Island test due to injury.

Pol Espargaro crashed twice as he set the pace for the three Red Bull KTM bikes in 19th.