Winterbottom vows to fight back after Clipsal pace issues 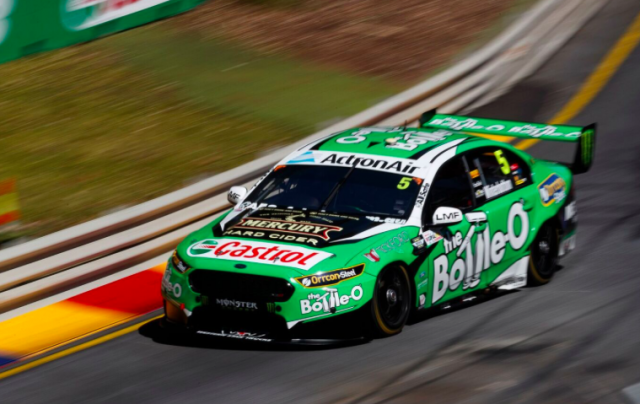 Mark Winterbottom is confident Prodrive has addressed his Clipsal 500 performance concerns but admits reeling in Shane van Gisbergen will be a difficult challenge.

The 2015 Supercars champion endured a lacklustre Clipsal 500 by his own high standards, finishing outside the top 10 in both 250km races in Adelaide.

Winterbottom showed glimpses of speed but an issue with his #5 Ford Falcon FG X restricted his straight-line performance by up to 0.4s a lap in the races.

The 35-year-old says the problem has since been identified by Prodrive and will be resolved in time for the non-championship Australian Grand Prix round later this month.

“I know where I was slow and it is an area that is out of my control,” Winterbottom told Speedcafe.com.

“We were 0.4s down a lap due to a particular area of the car.

“It doesn’t matter who you are, you can’t drive around that. I’m not that slow.

“It was frustrating. Friday I was quick then we had a drama and that put me on the back foot and it got worse as the weekend went on.

“I will get back into it and I will bounce back I’m sure.”

While expecting a much stronger showing now his performance issues have been addressed, Winterbottom admits the pace of Clipsal 500 winner Shane van Gisbergen is a concern for the whole field.

“Shane is in a league of his own, it is ridiculous,” he added.

“At the moment the speed he can get is even showing up Jamie (Whincup) and Craig (Lowndes) in the same equipment, so he is doing a great job. He can switch it on when he wants it.

“When he is doing that sort of stuff he is really hard to beat for sure, but it is everyone’s goal to get by him.

“He is going to be hard to catch for sure. We were in that position in 2015 and they (Triple Eight) overtook us now it is everyone’s job to step up and get them back.”

Aside from his straight-line performance deficit, Winterbottom was entrenched in the first real test for Supercars’ new judicial procedure after becoming involved in a tangle with Jamie Whincup in Race 1.

Stewards elected neither driver was wholly at fault for the clash resulting in the incident being unpunished.

Winterbottom accepts the new view from stewards but believes drive-through penalties for minor incidents such as kerb strikes requires a rethink.

“If that’s what the rules are then that is fine, you have just got to know how to race,” he added.

“Things like kerb strikes make our sport look a bit average. Drive-throughs for running over the kerbs is a bit farfetched.”

Winterbottom will return to the wheel when the series heads to the Formula 1 Australian Grand Prix for the non-championship round at Albert Park from March 23-26.