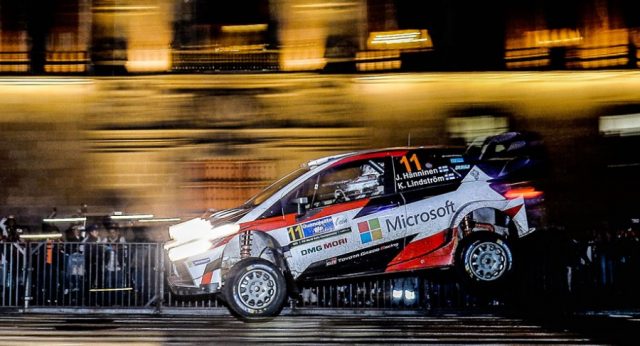 Hanninen was best on the Mexico City streets

Tens of thousands of fans packed the Zócalo Square with a rain shower in the middle of the first run mixing things up amongst the leading crews.

Hanninen who has crashed in the opening two rounds in Monte Carlo and Sweden, was fast and clean on the tricky street stage on his first run. Although he was fifth fastest on the second run, he holds a 1.6sec lead over Ott Tanak (Ford) and Kris Meeke (Citroen).

“No problems at all: the stage actually had more grip than I thought, which was surprising after the rain,”said Hanninen.

“It’s great to lead a world championship rally for the first time in my career, but this was just a bit of fun. We concentrated on getting through the stage without any mistakes and the car felt very good and easy to drive.

“Tomorrow the real challenge begins but it’s not such an early start so I am sure that we will wake up refreshed and ready for action!”

“We knew it would be a special start to the rally but this atmosphere was something else. It was an amazing feeling to drive our Hyundai i20 Coupe WRC in front of these crowds and in such a fantastic venue,” said Paddon.

“I am pumped for the rest of the weekend and hope that we can continue to put on a great show for all the Mexican supporters. Bring on the gravel stages!”

One driver with plenty of work to do is Elfyn Evans who incurred a 5-minute penalty after an engine change following the pre-event shakedown.

Straight after the twin-running of the 1.57km stage, the entire field plus hundreds of team members, officials, media were transported 400km back to the event’s base in León. All the cars were packed onto trucks for the completion of the Leg to be run on Friday local time.