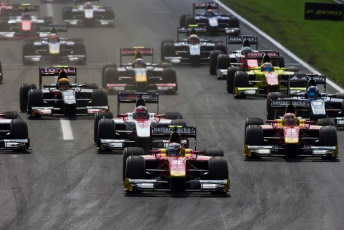 The GP2 Series will now be known as FIA Formula 2

The GP2 Series has been renamed the FIA Formula 2 Championship as part of the FIA’s single seater restructure.

The Formula 1 feeder series will slot in above Formula 3 and the newly created Formula 4 junior category.

“With FIA Formula 2, we now have everything we need to craft a clear and logical path for single seater drivers from grassroots for Formula One,” said FIA Single-Seater Commission President Stefano Domenicali.

“As they progress from karting, we have FIA Formula 4 at national level in countries all over the world, and from there the FIA Formula 3 European Championship is a fantastic proving ground before drivers take on the challenge of competing on the world stage.

“For us to now have FIA F2 in this process makes the whole thing complete, and we are looking forward to making FIA F2 a strong and popular series for drivers and fans alike.”

The FIA Formula 2 Championship will begin at Bahrain from April 14-16.