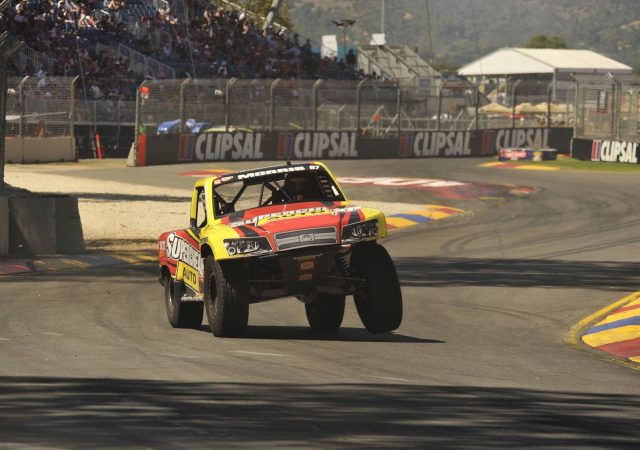 Paul Morris and Matt Brabham are both hoping to carry their strong early form into round two of the Stadium Super Trucks in St Petersburg Florida this weekend – battling the Americans in their own backyard.

The pair finished on the overall podium at the Clipsal 500 in Adelaide last weekend after clinching a local 1-2 in the final race of the Adelaide Casino-backed triple challenge.

For Morris, 49, it was his first race win in the Stadium Super Truck Series, but he is determined for it not to be his last.

He is pencilled in to compete in most of the US-based races this year which include races in St Petersburg and Long Beach (April 7-9) before an event back in Perth as a support to the Supercars on May 7-9.

That will be the last appearance for the trucks in Australia this year with Townsville and the Gold Coast not on the schedule.

There will be three more races in North America in Detroit, the venue of Matt Mingay’s horrific accident last year (June 2-4), Fort Worth Texas (June 9-10) and Toronto (July 14-16).

The Stadium Super Trucks will make another international expansion into China for an event on October 6-7.

“It was a pretty cool weekend and great to be back behind the wheel,” Morris told Speedcafe.com of his Adelaide races.

“Getting a win in that final race on the Sunday probably shows there is a bit of life in the old boy yet.

“It will be good to keep the momentum going into St Pete this weekend and rounding off with a good result in Long Beach in preparation for the first race in Perth.”

Brabham, who made his Indy 500 debut for PIRTEK Team Murray last year, is adding to his reputation as an extremely versatile competitor with every outing.

“It has been a big couple of weeks,” said Brabham, who is hoping to get together another one-off ride at the Indy 500 in May.

“It is always great to get home for a race or two and it was good to get the chance to head to the Gold Coast for a couple of days to see mum and dad before heading straight here to Florida.

“I was actually born in Florida, so technically, this is a ‘home’ race for me.”

The stadium Super Trucks have a 30-minute practice on Friday and a 30-minute race on both Saturday and Sunday.