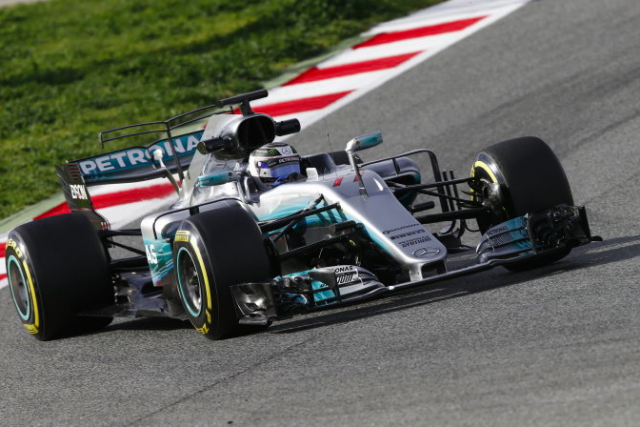 Mercedes provided an ominous glimpse of their outright pace by setting the fastest time of pre-season testing in an eventful second day at Barcelona.

New signing Valtteri Bottas set a new benchmark by recording a 1:19.310s, utilising super-soft tyres, in the morning which stood for the remainder of the day.

Bottas completed 70 laps before handing the W08 over to Lewis Hamilton for the afternoon session.

Hamilton ended up sixth on leaderboard after completing 79 laps, including a 20 lap run on the ultra-softs.

Williams’ strong start to the final test continued with Felipe Massa second fastest in the FW40.

The Brazilian was 0.110s shy having posted his best effort on the ultra-soft tyres.

However, Ferrari’s day ended prematurely when Kimi Raikkonen found the barriers at Turn 3 after he lost control of his SF70H.

The incident brought out the red flags early in the afternoon.

Damage incurred to the front and side of his car ruled the Finn out of action for the remainder of the day.

As a result, Raikkonen finished third on the time sheets but was restricted to just 53 laps.

The red flags were deployed in the final hour when Red Bull’s Max Verstappen came to a halt on circuit at Turn 12 with a suspected MGU-K issue.

The Dutchman had chalked up 102 laps while recording a time good enough for fourth on the timesheets.

After suffering three crashes during last week’s test, teenager Lance Stroll enjoyed a solid 59 lap run in the Williams after taking over from Massa.

The Canadian was fifth fastest on the super-soft tyres.

McLaren struggled for pace with Fernando Alonso mired in 12th between the Sauber drivers of Pascal Wehrlein and Marcus Ericsson.