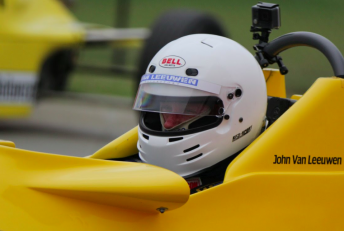 Long-standing Formula Ford Association chairman John van Leeuwen has resigned from his position after more than a decade in the role.

Van Leeuwen has become a key figure in the Australian Formula Ford scene having been involved  with the  association for 33 years.

During his time as chairman he successfully oversaw the junior category’s recent restructure after Formula Ford lost it championship status from CAMS.

He will remain a life member of the Formula Ford Association.

Van Leeuwen issued the below statement citing his reasons for his departure.

He remains confident the category will continue to flourish under new leadership.

“The reality is that I’m disappointed that I feel the need to step down as Chairman of the Formula Ford Association,” read the statement.

“I care greatly about Formula Ford at every level, which is why I’ve dedicated 33 years of my life to the category

“On one hand, I feel that I’ve left the category in very good shape.

“The 2017 season is shaping up as a bumper one for the Australian Formula Ford Series, with a fantastic grid at Sandown last weekend for Round 1.

“State racing is very healthy, and historic racing is booming and has become a greater and greater focus for the FFA.

“On the other hand – and this explains my decision to stand down – there is a small group of historic competitors that are of the belief that the FFA, under my leadership, has not looked after them.

“These accusations may be unfounded, particularly based on how healthy historic Formula Ford competition in this country is right now, but they are also relentless, personal, and tiring.

“They detract from the business of making Formula Ford, at all levels, the best category it can be. It is a counter productive movement from a small group of competitors.

“Add to that the barrage of social media attacks coming from this very small group of competitors, it has taken its toll. Hence my making the tough decision to stand down.

“The FFA is in decent financial shape, something we’ve worked very hard on over the last few years. That solid financial position allows it to run the Australian Formula Ford Series, and my hope is that the Association continues to bear in mind the importance of its finances.

“With careful stewardship there is no reason that both the category and Association can’t continue to flourish.

“I’d like to thank all of the committee members I’ve worked with, the FFA members, and Phil Marrinon for his incredibly hard work as our national series administrator.”

The Australian Formula Ford Series enjoyed a successful start to the 2017 season with a 31-car grid at Sandown last weekend.