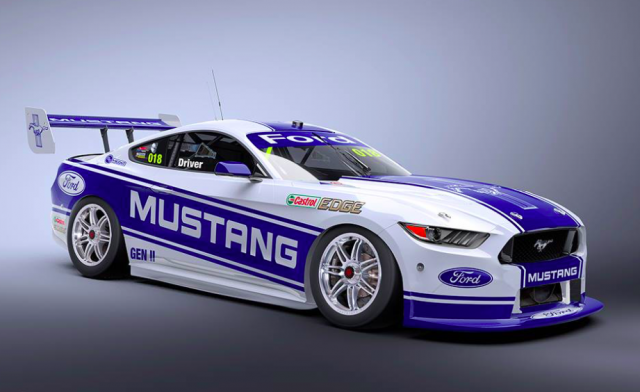 A render of a Ford Mustang Supercars produced by SS Media

DJR Team Penske has reiterated that any plans to race a Ford Mustang in the Supercars Championship in the future are a long way from coming to fruition.

The emergence of Gen2 regulations from 2018 has seen the American/Australian alliance consider its options for the future with the Mustang tipped as a possible replacement for the Falcon FG X.

With the Falcon FG X becoming outdated in a marketing sense, DJRTP has joined fellow Ford team Prodrive in evaluating plans to introduce a Mustang into Supercars.

Under the new Gen2 regulations, two door body shapes are permitted along with non V8 engines.

Holden is the only marque to commit to the new rules with plans already underway for a V6 powered Commodore to be introduced next season.

Loyal to the Ford brand both in Australia and through Penske’s NASCAR operations in America, DJRTP admits any decision to switch to the iconic model will require support from the blue oval.

DJRTP Managing director Ryan Story says Ford’s position regarding Supercars involvement is unchanged, but it hasn’t prevented the operation from looking into the Mustang.

“It is a long way off happening,” Story told Speedcafe.com.

“These things are a question of funding as well as intellectual property. It is down to Ford’s appetite to do something in the series and to give a project like that their blessing.

“We have the capability of continuing with the car (FG X) we are running now next year.

“Obviously in an ideal world we wouldn’t want to do that, but the reality is we want to field the best car that we can.

“If that means an opportunity presents itself which is different to what we are doing then we will absolutely pursue it.

“It is not a decision that we would make unilaterally.

“It would be silly for us not to look at least and understand what may or may not be involved in changing.

“Ford have made it very clear where they are at in terms of their interest in Supercars.

“They have been very supportive of us particularly as they transition out of manufacturing in Australia.

“We have a relationship (with Ford) that extends through to a licensing agreement where we have presence of the blue oval on our merchandise.

“Penske represent (Ford) through their NASCAR operations which is an enormous part of Ford’s marketing in the US, so the Ford connection is always strong, but they have made their position on Supercars quite clear.

“You can’t race someone else’s car if they don’t want you to. Nothing has changed from Ford’s previous statements of where they are at.”

While the decision to change platforms is not entirely up to DJRTP, Story admits a move to homologate a new car requires meticulous planning.

Such a decision can risk on track performance, but he is confident the operation has the resources to cope with the development of a new supercar.

“There is a huge amount of work involved in homologating another car,” he added.

“It has to be meticulously planned out and we have seen over time when these projects have been undertaken thorough preparation and planning has seen some of those new cars come out in pretty good shape.

“You can severely compromise your efforts the following season if you made a late call to change platforms.

“I think that having the people we have, we are well placed if we were to do something and we would be able to hit the ground running pretty quickly.”