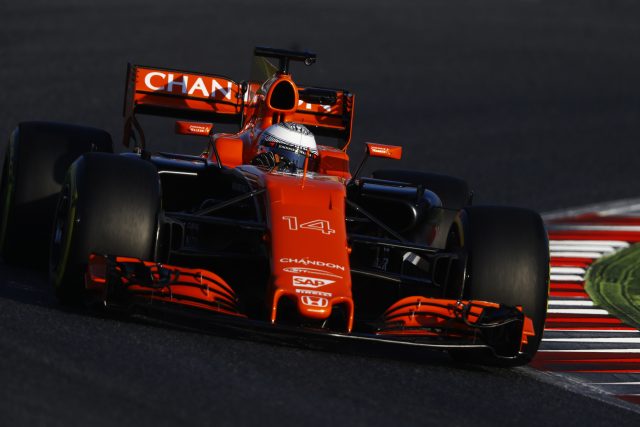 Fernando Alonso is demanding a swift resolution to Honda’s engine issues after claiming the power unit has ‘no power’ and ‘no reliability’ in pre-season testing.

The McLaren driver heavily criticised the Japanese marque following another difficult day for the Woking team on the second day of the final test.

Alonso struggled for pace with the double world champion mired in 12th position, 3.7s shy of the front running Mercedes.

Honda has encountered several reliability issues during both pre-season tests with McLaren forced to undergo another engine change on Tuesday.

The Spaniard believes McLaren has created a good chassis for the MCL32 but is being let down by Honda.

Alonso is desperate for an immediate response from the engine supplier having been clocked 30km/h down on its rivals.

“I don’t think we are too far back in terms of chassis side,” said Alonso. “We have only one problem: that is the power unit.

“There is no reliability and there is no power. We are 30km/h down on the straight, every straight.

“So when you are 30km/h down on every straight it is difficult to have a feeling on the car.

“Everything feels good, but when you arrive to normal speed you don’t know what is going to happen.

“Definitely we need to improve and we must improve.

“The situation is far from ideal. We are a big team. McLaren has been dominating the sport for many years and fighting for the championship for many years.

“When you think about McLaren when you see a McLaren, you are afraid of them when you are an opponent because you know McLaren will sort things quickly as a big team. So this is what we need.

“We need a reaction from everyone. We need to stay united, working close to each other. But definitely a big reaction that I expect from the team immediately.”