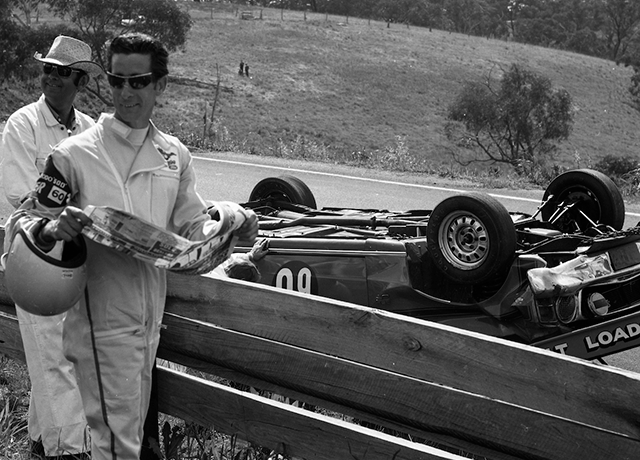 This great photo from the AN1 Images archive shows a relaxed Barry Seton hitting the classifieds just after rolling the factory Ford GT-HO Falcon he was sharing with Fred Gibson in the 1969 Hardie-Ferodo 500 at Mount Panorama, Bathurst.

We’re not sure if Barry is looking to buy another Falcon or whether he’s checking out the employment pages. Either way the news is not good.

Tyre failures plagued the big factory Falcons during the 1969 race. Seton had a rear tyre let go at McPhillamy Park when he was only 200 metres behind eventual winner Colin Bond in the HDT Monaro – the car tipped over onto its roof and was out of the race.

Brock and his long-time sparring partner Allan Moffat made their Bathurst debuts in 1969, with Moffat finishing a lap down in fourth place in his XW Ford GTHO.