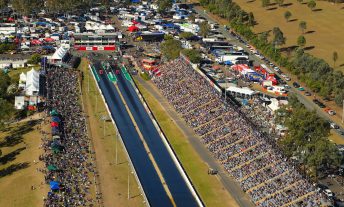 The Winternationals will enjoy new backing for its 50th running

The Australian oil company has inked a multi-year deal to become the naming rights partner of the Willowbank Raceway event, which is the largest drag racing meeting outside of North America.

This year’s 50th running, which will also double up as the final round of the 400 Thunder Series, will be held from June 8-11 at the Queensland venue.

“As we prepare for both the 50th running of the Winternationals and the 30th anniversary of the event calling Willowbank Raceway home it is certainly an exciting time, and this is now even more true that we are able to confirm that respected company Gulf Western Oil has thrown its support behind us and the event,” said Willowbank Raceway president Tony Wedlock.

“In a multi-year deal, Gulf Western Oil will hold the naming rights of what is Australia’s largest drag racing event and indeed the largest championship event held outside of the United States.”

The Winternationals will welcome of wide spectrum of classes ranging from the showpiece Top Fuelers to junior dragsters.