Nissan Australia has confirmed the 2015 Playstation GT Academy winner will pilot a Nissan GT-R GT3 once again in the endurance series.

As previously reported, the former postal worker from Brisbane headed to Europe last week to finalise his 2017 plans.

Having competed in the amateur ranks last year, Simmons will step up to the pro class, where he will joined by British former single seater racers Matt Parry and Struan Moore in the RJN Motorsport #22 GT-R.

Parry spent last season competing in GP3 while Moore has raced in BRDC F4 and has experience in the Blacnpain Endurance Series.

The car will share a garage with the #23 official factory-backed entry to be driven by Lucas Ordonez, Alex Buncombe and former Bathurst 12 Hour winner Katsumasa Chiyo.

“This off-season was a little different to last year as I wasn’t sure what I would be doing and was happy to race anything with Nissan,” said Simmons.

“To be confirmed now, to have another crack at Blancpain in the GT-R NISMO GT3 is the best possible outcome.

“I can’t thank Nissan Australia and RJN Motorsport enough for making this all possible. 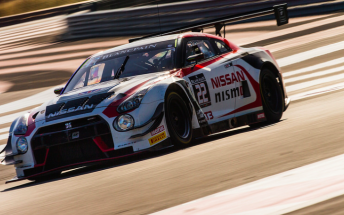 Simmons will continue to pilot the #22 Nissan GT-R

“I feel extremely privileged to go to race tracks that I have raced at before.

“It will definitely be an advantage for me. That doesn’t mean it will be easier though, as we are stepping up to the Pro Class so I am going to have my work cut out for me.

“I am looking forward to the challenge that this year will bring.

“I really just want to try and improve at each round we race at and continue my development.”

Simmons is expected to jump behind the wheel of the GT-R GT3 at the official Blancpain Endurance Series pre-season test at the Circuit Paul Ricard in France from March 13-14.

The opening round of the season will be held at Monza from April 22-23.