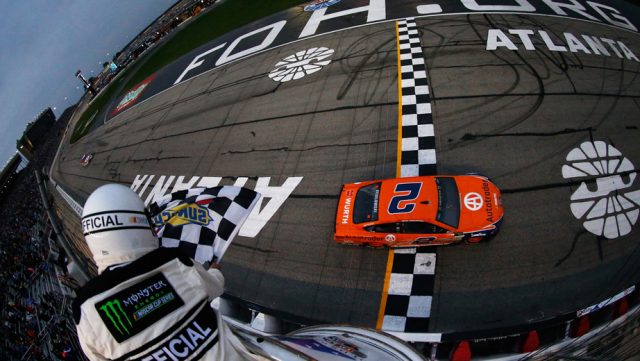 Keselowski takes the victory in Atlanta

Brad Keselowski has overcome a loose wheel nut and a dominant Kevin Harvick to win the Fold of Honor 500 in Atlanta.

The race was dominated by Harvick who took the bonus points for being in front at the end of the first two stages of race. However, on the last pit stop with less 15 laps to run he was caught speeding on pit road and had to re-start off the rear. He would go onto finish ninth.

Keselowski had beaten Harvick off pit road during pit stops under caution on lap #118. However, the crew found that it had not properly tightened one of the wheel nuts and he was called back to the pits.

From that point he put his head down and worked his way back to the front. Then the Penske crew gave him a great pit stop and Harvick made what would be his one and only mistake of the race. In fact at that point he had not run lower than fourth place in the race.

On the re-start Kyle Larson had the lead, but Keselowski pressed him and soon took the lead with seven laps to run.

“You never know. That’s how these races are. We had a lot of adversity today there’s not doubt about that. These races aren’t easy,”said Keselowski.

“This one kind of fell in our lap at the end and my team put it all together when it counted.

“We were able to get by Kyle (Larson) there at the end. I knew that he wasn’t going to be easy to pass. His car was great and I was able to make the right moves to get by him.”

After dominating Harvick was frustrated with the outcome.

“It’s my own doing today. I really didn’t think I was even close on pit lane. It gets to bouncing around, I thought I was being conservative, apparently I wasn’t,”said Harvick.

“I just made a mistake that I preach all the time that you don’t need to make and beat yourself and then you go out and make it yourself instead of following all the things you preach.

“The good part about it is our Ford has been really fast. We will pick ‘em up and start again next week.”

The race proved a challenge for several drivers with plenty handed pitlane speeding penalties. Electrical issues for both Richard Childress Racing cars of Ryan Newman and Austin Dillon forced them to the garage to change batteries.

Also going to the garage was Denny Hamlin who had to have his left-rear hub replaced.

Next week NASCAR heads to Las Vegas for third race of the season.

Next Story Truex Jr. wins as fight breaks out in Las Vegas