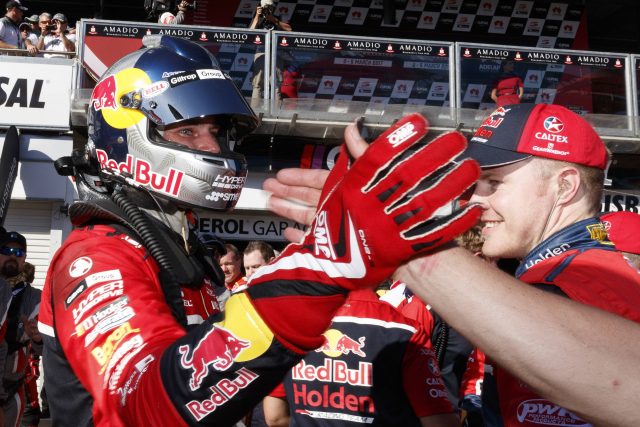 Shane Van Gisbergen earned his second Armor All Pole position of the Clipsal 500 weekend after another stunning display in the Top 10 Shootout.

The Red Bull Holden Racing Team driver produced another gutsy lap to post a 1:19.75s with the final lap of the shootout.

The Kiwi was set an impressive benchmark to beat by DJR Team Penske’s Fabian Coulthard, but the reigning champion managed to surpass the time by 0.02s.

“It is very cool. The car was really good at the start of the lap but then it went off,” said van Gisbergen.

“There are three Kiwis up front, it should be a good battle.”

Coulthard was left to settle for second repeating the front row for Race 1.

Mobil 1 HSV Racing’s James Courtney will head up the third row which he will share with South Australia’s Nick Percat (Brad Jones Racing), who topped the shootout in the early stages.

Cameron Waters will start from seventh ahead of Garry Rogers Motorsport’s Garth Tander.

A lock up on the entry to Turn 4 from Brad Jones Racing’s Tim Slade left him in ninth, while Jamie Whincup had his time wiped for overusing the kerbs at the Turn 2 chicane.