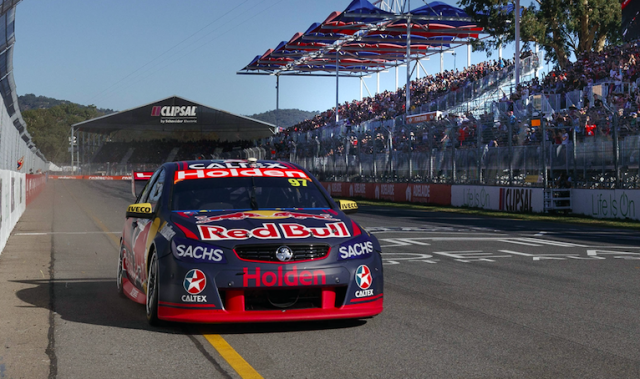 McLaughlin appeared to be in the box seat to claim a maiden win for the DJR Team Penske alliance before a mistake by the 23-year-old at Turn 9 allowed van Gisbergen through to the lead with three laps remaining.

The lock-up of the rear for McLaughlin proved costly as the Kiwi was left to come home in second while Triple Eight’s van Gisbergen completed a perfect start to his title defence after winning Saturday’s opener.

van Gisbergen had hauled McLaughlin in over the closing laps to create a grandstand finish, having faced a 5.3s second deficit after the final stops.

“This is just the best feeling. It is great to get on top of these tyres straight away, (and we had) awesome battles all weekend,” said van Gisbergen.

“I really enjoyed myself and am looking forward to the rest of the year.”

A disappointed McLaughlin admitted he threw the win away in the final laps.

“I threw it away. Shane was fantastic, his car was really fast,” said McLaughlin.

“I just didn’t quite have the pace in the last stint, but thanks to all the fans.

“My first Ford Clipsal 500 has been fun, so thank you (and also) to Shell V-Power and all our sponsors and supporters, it has been fun.

“Two podiums for Shell V-Power Racing is not a bad thing to go away with, we will work hard and come back stronger.”

A strong drive from Chaz Mostert saw him claim the final spot on the podium for Prodrive Racing.

The battle for the race win saw two pit stop strategies in play by McLaughlin and Race 1 winner van Gisbergen.

Pole sitter van Gisbergen elected to run long in his second stint in the hope the strategy would pay off, while McLaughlin made an under cut work after making his first stop on lap 8.

Mclaughlin emerged in the lead after the first round of stops and he managed to maintain the advantage after the final trips to the pits.

van Gisbergen was crucially caught up behind Mobil 1 HSV Racing’s James Courtney during his second stint that saw him fall nine seconds adrift of McLaughlin.

The Red Bull Holden Racing Team driver made slow progress in closing in on McLaughlin in the final stint before a rapid surge in the final laps.

Courtney proved to be a factor for the majority of the race, coming home in fourth ahead of the sister #12 DJR Team Penske Falcon of Fabian Coulthard, who led the opening 15 laps courtesy of a lightning start.

Cameron Waters’ strong weekend continued as he brought the Monster Energy Ford Falcon in eighth behind Jamie Whincup (sixth), who struggled to match the pace of his team-mate, and Tim Slade (seventh).

Simona de Silvestro brought the #78 Team harvey Norman Nissan to the finish in 23rd despite being punted into a spin by Courtney at the final corner earlier in the race.

The incident was to be investigated by stewards after the race.

She was also issued a drive-through penalty for over use of the kerbs.

Fellow rookie Alex Rullo enjoyed a positive end to his weekend by reaching the finish on his Supercars debut.

Nick Percat was the race’s only retirement after striking the wall at the high speed Turn 8 in his Brad Jones Racing Commodore on the opening lap.

The South Australian was able to nurse the car back to the pits, but damage to the steering arm and brake calliper ultimately proved to be his demise.

The issue dropped him to 22nd position at the flag.