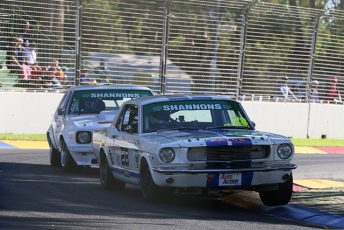 A wrap of the action from the Clipsal 500 in Touring Car Masters, Aussie Racing Cars, and Stadium Super Trucks.

A multi-car crash on the opening lap headlined the Trophy Race for Touring Car Masters.

Cameron Tilley in turn drove his Pacer into the side of Lawlor’s Ford, but both Richards and Lawlor were fortunate to incur the heavy contact in their respective passenger doors.

Tony Karanfilovski (Mustang) led all the way on the road, but was issued a 22-second penalty post-race for a restart infringement.

That development elevated Brad Tilley to the victory, after he withstood a strong attack from Adam Garwood (Torana) after the Safety Car period.

The Young Tasmanian toured the grass with two laps remaining as he attempted to find any way past, but still kept Tilley honest to the chequered flag.

Steven Johnson (Mustang) and John Bowe (Torana) threaded their way through the traffic to fourth and sixth respectively.

TCM continues with Round 2 supporting the Winton SuperSprint from May 19-21. 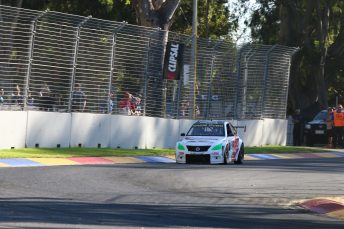 Kel Treseder crossed the line first in Race 4 but James Duckworth was awarded the race win after the former took out Craig Woods in a front-running battle.

Duckworth got the start and held off Woods until the field soon came under the control of the Safety Car.

Ben Walsh and Cobi Rontaunay had made contact at Turn 5, spinning the latter into the wall.

The race restarted on Lap 4 and a five-way battle at the front of the field quickly developed.

Treseder dived at third-placed Luke Fraser with two laps to go, passing the Adelaidean but punting Woods in the process.

He then reset his own lap and passed Duckworth, but was issued a post-race penalty for his trouble.

Duckworth thus bagged a second race win of the weekend and kicked off his title defence with the round win.

Round 2 supports the Tasmania SuperSprint from April 7 to 9. 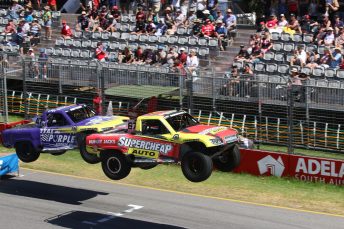 Craig Dontas brought out the red flags on Lap 1 when he rolled at Turn 7, having grabbed too much kerb in his Shannons truck.

Morris passed Jeff Hoffman for the lead shortly after the restart, the pair touching in mid-air as they jumped side-by-side along the main straight.

The race exploded on the final lap, first with defending champion Sheldon Creed spinning at Turn 4 after going deep under brakes on the outside of a bunch of trucks.

Gavin Harlien caused one final pile-up when he half-spun and rebounded off the tyre wall at the very next corner in front of that same pack.