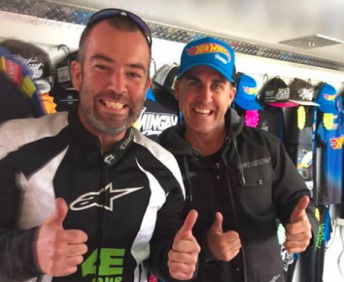 An Adelaide stunt rider is recovering from surgery after an on-track accident at the Clipsal 500 yesterday.

Allan Morrison is listed as stable by the Royal Adelaide Hospital while stunt team boss Matt Mingay said the surgery was successful.

Morrison was injured during the stunt show between race categories in the lead-up to the first of the weekend’s Supercar races yesterday when he went over the handlebars, according to those near the accident.

“He had an operation last night on his spine, they fused T11 and T12 together, he has feeling back in both legs and movement in one, which is a real good sign, it’s nothing but good news,” Mingay told Speedcafe.com.

“He’s very lucky, it’s very good news and we are all really happy and hope for nothing but the best for his rehab.”

A message was also posted on his team’s Facebook page in the aftermath of the accident.

“He had a nasty stunt bike accident yesterday which saw him make a trip to the hospital for surgery.on his spine, read the post.

“Surgery went well and (he) should make a full recovery real soon.

“Everyone please get behind him, give him a follow and help him on his road to recovery.”