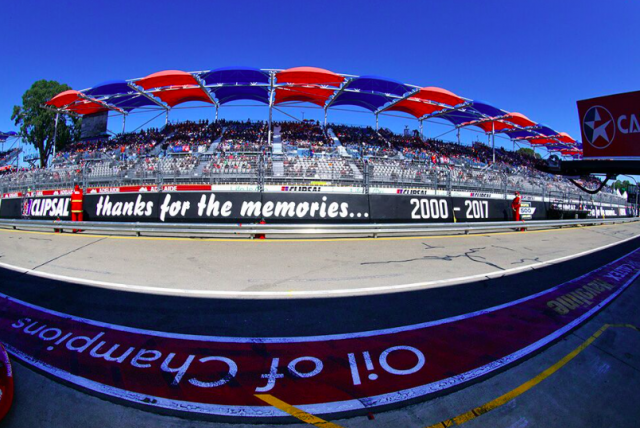 The time honoured Adelaide 500 Supercars race is yet to secure a naming rights sponsor for next year.

As Clipsal’s 18-year stint as title sponsor comes to an end today, the electrical supplier’s replacement for the 2018 event has yet-to-be announced.

South Australia Minister for Tourism and Motorsport, Leon Bignell, told Speedcafe.com an announcement will be made in the next few months.

“We’re having some discussions with some national and international players,” Bignell said.

“They‘re going really well and we’re confident that we’ll have an announcement in the next few months, but we don’t want to rush anything.

“There’s two or three (potential sponsors) still around the mark and we’re having good discussions with them.”

Supercars CEO James Warburton was aware of two global brands in discussions with the SA authorities about naming rights sponsorship for the 2018 event, and acknowledged it would be a challenge for the next sponsor to put its stamp on the event.

“I think it will be a challenge but the great thing about our fans is that they support the brands that support the series,” Warburton told Speedcafe.com.

Warburton was also supportive of the SA government’s timetable for signing and announcing a deal in the months after the final Clipsal-sponsored event, rather than during the final stages of this year’s edition.

“Even if they had a deal in the can – and I don’t know if they do – I think it would be disrespectful to the current sponsor,” he added.

“It’s very rare that an event goes by the commercial name, but I think it’s a positive for the city to take ownership of the event as well.”

Rumours circulated of a naming rights deal involving the On The Run convenience stores, but those within the Peregrine Corporation, that owns the chain, maintains its sole motorsport focus is the development of the purpose-built facility at Tailem Bend.

The venue is aiming to bring a second Supercar round to South Australia as part of the 2018 season, but is yet to complete its deal with the series organisers.