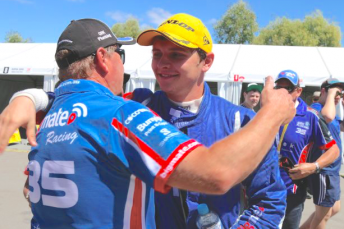 Todd Hazelwood has described his maiden Dunlop Super2 race win as a ‘huge weight off the shoulders’ after he triumphed in front of his home crowd in Adelaide, in his fourth year in the series.

Hazelwood has struggled to finance his fledgling racing career since entering the second tier of Supercars in 2014 and regularly resorts to holding sausage sizzles to raise funds.

The 21-year-old had won the start but was repositioned behind Paul Dumbrell as the field was restored to starting grid order due to a problem with the red lights which started the race.

However, the veteran ran wide in front of Hazelwood what would be the penultimate lap, allowing the Matt Stone Racing driver to regain the lead and ultimately win the motor race.

“It’s a huge weight off the shoulders, to be honest,” Hazelwood told Speedcafe.com.

“The amount of fundraising events we’ve done, the amount of sausage sizzles we’ve done on weekends and weekdays. Last year we did 120 fundraiser barbecue days just to raise money to go racing.

“There’s that sort of level of commitment not only from myself but the family and supporters; there’s a lot of people that help out to make all that happen.

“It’s good for them to see that we’re not just wasting our time here, we’re actually achieving stuff and achieving the goals that we want to achieve.”

Hazelwood missed out on a golden opportunity to break his duck at Sandown last year, having comfortably led the opening race before being reeled in by Garry Jacobson and Jack Le Brocq.

Taking advantage of a Safety Car restart, Le Brocq dived at Hazelwood at Turn 1 and the contact took both off the track on the final lap, costing either the race win.

Hazelwood says that the experience of 2016 leaves him well-placed to win the title this time around.

“Last year was a trying year,” he reflected.

“It just felt like anything that could go wrong did go wrong.

“Last year we were in a race-winning position (in Adelaide) and we had a flat tyre and obviously Sandown, a lap to go, and we got run off the track in racing circumstances.

“I think when you really have to work hard for something it just makes it super special and now that we’ve finally achieved that race win, the next goal is to get a round win and then the next goal after that is to win the championship.

“We know what we have to do to win a championship, last year we tried super hard and it was a big learning year for us.

“I think all that learning and being patient is starting to pay off and hopefully we can use this momentum into the future.”

While Dumbrell won the opening round courtesy of two race wins, Hazelwood is his nearest rival, just eight points adrift.