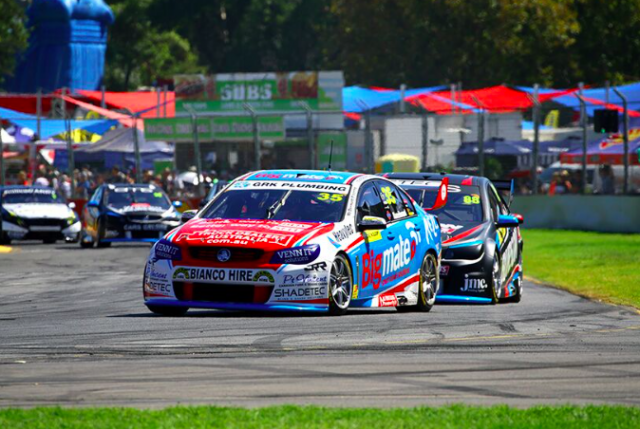 Todd Hazelwood has broken through for his first victory after four years of trying in the Dunlop Super2 Series, following the second dramatic race start for the Series at the Clipsal 500 this weekend.

Hazelwood was able to force a mistake from Series veteran and round winner Paul Dumbrell in turn four on lap 12, with Dumbrell locking a brake and running wide before getting crossed up as he attempted to resume.

This saw Hazelwood take the lead in front of his home crowd, with ‘PD’ left to battle for second with third-placed Jack Le Brocq as the race was declared time certain with just one lap left to run moments later.

Fourth and fifth across the line were Macauley Jones and Andrew Jones, ahead of impressive debutant Will Brown, Garry Jacobson, Jack Perkins, Bryce Fullwood and Anton de Pasqaule.

“I am speechless, it is so awesome to just get that first win and in front of the home crowd,” Hazelwood enthused ahead of the podium.

“We have so many local supporters on the car this weekend and I can’t thank everyone enough at Bigmate Racing and the team at Matt Stone Racing, they have done a great job all weekend.

“We have had a fast car and been trying to beat PD all weekend, so to be able to finally make him make an error and get past was pretty sweet.

“This is our fourth year and we have been trying for a long time.

Before Hazelwood’s could cross the finish line in victory, he and the rest of the field had to overcome yet another controversial and carnage-filled race start.

As the field awaited the race start, the lights flashed red three times (instead of just going out to signal the start). In response, a large portion of the field went to make a move before aborting and then resuming, resulting in chaos across the grid.

As Josh Kean attempted to weave his way through the confused field in the #5 Wynn’s Prodrive Australia Falcon, he clipped the #55 Acroplate Racing Holden VF of Kurt Kostecki, before making heavy impact with the left hand track wall.

Initially, the race was declared as started and under safety car by race control, but later it would be decided to reorder the field into the original grid order ready for the safety car restart.

Prodrive boss Tim Edwards declared his displeasure with the situation as the field circulated under safety car.

“That is a disgrace. Forget about the fact that our cars are destroyed, that doesn’t constitute the start of the race – flashing lights, it is just a joke,” Edwards declared.

“Josh is out of the car, he walked over to the medical car okay, but there is significant damage to that car. It would have been avoidable but something has gone wrong with the starting, I am not sure if someone has had a bit of a little whoopsie on the finger or what, it’s just unbelievable.”

Once Kostecki made his way back to the lane, he declared that the start – which was noted as to be investigated post-race by officials – was something that needed to be ‘sorted’.

“There was so much confusion there from Supercars, and the lights went on and off four times – I am pretty sure they are just supposed to turn off so that is a big mistake by them and it has caused a lot of damage and caused a lot of broken cars,” Kostecki lamented.

“I don’t know where we are going to go to from here but that is definitely going to need to be sorted.”

The race was restarted after 18 minutes had elapsed, with seven laps completed under the safety car.

Dumbrell lead from Todd and Le Brocq in what was a clean restart, with Hazelwood never letting up on Dumbrell over the coming laps.

There were plenty of scraps for position throughout the field, and late in the race Shae Davies would have a big lock-up and clout the turn one tyres for front right damage.

He wouldn’t let that stop him, bringing the car home and fighting for position right until the end where a last corner incident book-ended what had been an intense race.

As the final corner was approached with Davies in eighth position and followed by de Pasquale and Perkins, the three went nose to tail and Davies was spun after receiving contact to the rear of this car, leaving the following cars scattering to avoid his spinning car. He would finish in 13th position.

Perkins was served a 15 second post-race penalty for the contact onto de Pasquale and subsequently Davies.

The Dunlop Super2 Series will next be on-track for the Tyrepower Tasmania SuperSprint across April 7-9. Dumbrell leads the championship on 292 points from Hazelwood (284) and Le Brocq (258).

Next Story Hazelwood opens up on emotional maiden win