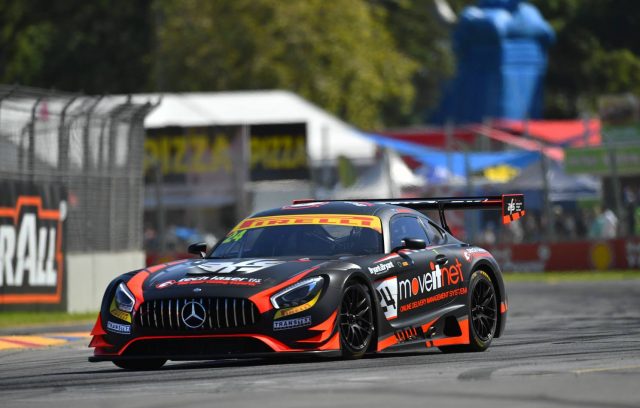 Tony Bates doubled his winning tally in Race 3 of the Australian GT Championship at Adelaide, which was halted for several minutes after a major multi-car crash at Turn 8.

Tim Miles made heavy contact with the outside wall on Lap 2, and was hit hard by Dean Canto on the latter’s way past, lifting the Canto/Jim Manolios Lamborghini Huracan into the air.

Kelvin van der Linde also clipped the Miles Lamborghini as he attempted to evade the carnage, but continued on with a piece missing from the door-skin of the #74 Jamec Pem Audi. 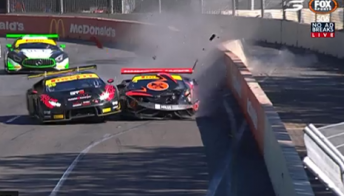 Both drivers were unhurt and exited their vehicles, but the red flags were thrown out to allow officials to reposition the concrete wall.

Roger Lago, who won the start, led the field away when racing resumed nearly 15 minutes later, and held the place until he was among the last to make his compulsory pit stop.

Race 1 winner Bates inherited first position at the completion of the pit cycle, just over a second ahead of Lago, but the debutante soon came under pressure from the #23 Lamborghini.

Bates managed to hold on to win the race and round in his Mercedes, with Lago finishing runner-up in both.

Liam Talbot (Porsche) finished sixth, despite a late-race coming-together with Greg Taylor which saw the #5 Audi end up in the wall entering the racecourse section of the circuit.

Fraser Ross/Come Ledogar (McLaren) finished one position outside the top ten by virtue of a 10-second post-race penalty issued to the #59 Tekno entry due to multiple starting procedure infringements.

Ledogar had gone on a charge in the latter stint of the race, highlighted by a bold move past Samadi into Turn 1 and the setting of the fastest on Lap 11

Ash Walsh/James Koundouris were only 16th after Walsh ran the Supabarn Audi up the Turn 4 run-off area while running second prior to the opening of the CPS window.

Scott Taylor/Craig Baird (Mercedes) finished 18th having incurred a flat tyre in the second lap carnage, while Steven Richards/James Bergmuller were a position worse off as technical problems continued to plague the BMW.

Steve McLaughlan sat out the race for the second day in a row due to neck soreness.

Round Results: Championship class, Round 1