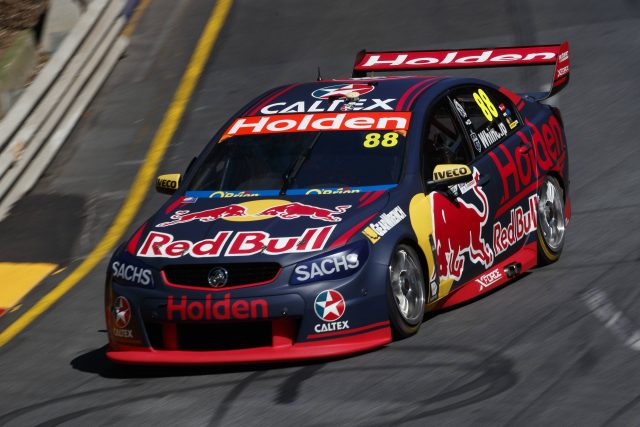 Jamie Whincup clocked the fastest time of the Clipsal 500 weekend so far to top the final practice session.

The Red Bull Holden Racing Team driver utilised a green tyre run to post a 1:19.76s in the final five minutes of the hit out.

The six-time champion edged team-mate Shane van Gisbergen by 0.15s as the pair prepared for this afternoon’s Armor All Top 10 Shootout.

Cameron Waters continued to show his impressive pace in the #6 Monster Energy Falcon to end the 20 minute session in third.

“It was really good. We are just working on our program,” said Waters.

“I am stoked to make the Top 10 Shootout. My engineer and I are working together really well, we are making the car better every session and made it a bit better than, hopefully we can sneak forward in the shootout.”

Prodrive team-mate Mark Winterbottom was fourth ahead of the sister Supercheap Auto Falcon of Chaz Mostert.

James Moffat produced his best display of the weekend by claiming sixth in the Garry Rogers Motorsport Holden Commodore.

Slade endured a brief spin in the early part of the session.

Scott McLaughlin was the top DJR Team Penske runner in 11th, while Craig Lowndes focussed on setting up his TeamVortex Commodore for the race in 22nd position.

The grid for today’s opening race will be determined by the Armor All Top 10 Shootout, which will begin at midday local time.