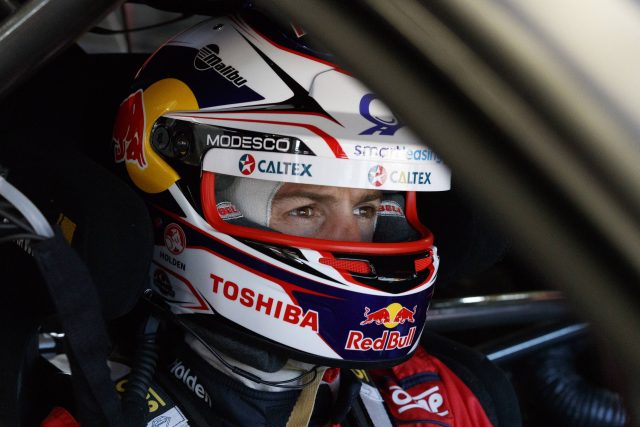 The six-time champion was involved in an incident that pitched Winterbottom into a spin following side-to-side contact while the pair were disputing 10th spot at Turn 5 during the 78 laps race.

Stewards conducted an investigation after the race where it was deemed there was no breach of the rules.

The case was the first test for Supercars’ new judicial system and is likely to set a precedent for the future.

Red Bull Holden Racing Team manager Mark Dutton confirmed to Speedcafe.com the result of the investigation and the reasoning behind the decision.

“Because there was such a good overhead shot which showed the whole sequence playing out and if you follow the rulebook Jamie was at the B-pillar and was in control.

“The other car being passed has to leave at least one car width.

“The problem that may have come up is where that is measured from, it is not the wall of the kerb it is the yellow line, that’s the track.

“If you look overhead there is clearly not a car width.

“It is good there are new people in the stewards room and they went into a detailed investigation and looked at video.

“I’m happy with not just the outcome but the process.”

Speaking ahead of the stewards decision, Prodrive boss Tim Edwards felt it was right for stewards to investigate the incident after the race.

“Anyone can just jam a car into the inside of the corner but you can’t use a bloke as a mechanism to get by.

“This is a great test case for the new system and they did the right thing to investigate after the race.”

Meanwhile, Supercars.com has confirmed that Brad Jones Racing has been fined $10,000 ($7,000 suspended until the end of the year) and docked 96 teams’ championship points for failing to put a memory card in Nick Percat’s judicial onboard camera.

Todd Kelly has also been docked 35 points for his involvement in an opening lap incident, including James Moffat (GRM) that saw Tekno Autosports’ Will Davison fire into the wall at Turn 8.

Next Story Organisers closing in on new Adelaide 500 sponsor