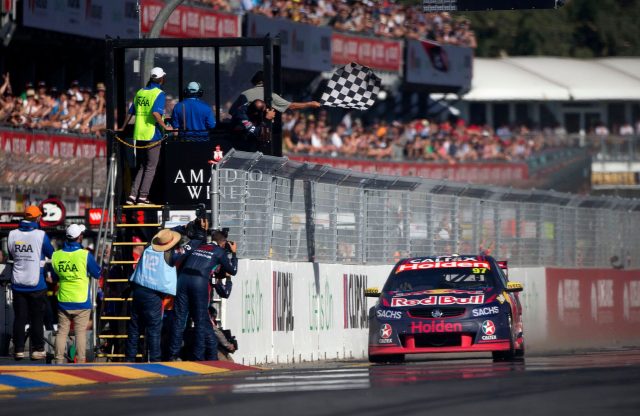 Shane van Gisbergen produced an impressive performance to kick start his title defence with a win in the opening Supercars race of the season at the Clipsal 500.

The reigning Supercars champion converted his pole position into the lead although the Red Bull Holden Racing Team driver lost the advantage to DJR Team Penske’s Fabian Coulthard on the opening lap.

Van Gisbergen only reclaimed the lead after the second round of pit stops before delivering a commanding final stint to take the chequered flag by 14.7s.

Coulthard was unable to match his countryman’s pace in the punishing 31.1C degree temperatures, leaving him to settle for second, ahead of James Courtney (#22 Mobil 1 HSV Racing Commodore).

It proved to be a race full of action which was punctuated by the Safety Car on Lap 20.

The stoppage was triggered when Brad Jones Racing team-mates Tim Slade and Nick Percat tangled forcing the former into the wall at Turn 6.

The incident, which stewards felt didn’t warrant a penalty, triggered a flurry of action in the pits. Slade was able to rejoin the race.

As a result of the first round of stops, Coulthard led Courtney, Jamie Whincup – who pitted on lap 1  – van Gisbergen, Scott McLaughlin and Winterbottom. A charging van Gisbergen made light work of Whincup to take third having held second prior to the stops.

The top three managed to break away from the field before van Gisbergen assumed the lead after the final stops.

There was drama following the stops for Winterbottom who spun at Turn 5 after contact with Whincup while fighting over 10th position.

The incident will be investigated after the race as Winterbottom finished in 15th spot.

Prodrive Racing’s Cameron Waters produced a solid drive to climb from ninth to fourth ahead of Nissan Motorsport’s Rick Kelly.

Whincup managed to secure sixth from Lowndes in the final laps, while Percat was also able to pass the struggling Triple Eight Commodore for seventh.

Lowndes had scythed his way through the field from 13th to sixth before his late race slump.

A pit lane penalty for weaving on the Safety Car restart earlier in the race saw McLaughlin’s day unravel.

The Kiwi had been running strongly in fifth before the penalty dropped him to the rear of the field.

A fighting drive saw him climb to 17th at the chequered flag.

Meanwhile, Will Davison’s race was over before it really began when his Tekno Autosports Holden Commodore found the wall at the high speed Turn 8 on the opening lap.

The #19 was battling with Todd Kelly’s Nissan before running off the racing line, which resulted in contact with the wall and an early retirement.

The incident was to be investigated by stewards after the race.

Kelly’s race was then hampered further by two right rear punctures on lap 4 and lap 37 that saw him return to the pits.

He was able to rejoin the race before going on to finish in 22nd.

Lucas Dumbrell’s Taz Douglas returned to the pits after 44 laps having suffered a suspected cool suit failure in the punishing hot conditions.

After struggling with the conditions the team elected to pull him into the pits and he immediately jumped in an ice bath.

Following a period on the sidelines, Douglas returned to the race in the #3 LDM Commodore before going on to finish.

Douglas was not the only driver to suffer a cool suit failure as Jason Bright suffered from the same problem.

The Prodrive racer also battled with a malfunctioning radio although the veteran fought hard to finish in P21.

Dale Wood also retired from the race with a gearbox issue on the #99 Erebus Motorsport Commodore.