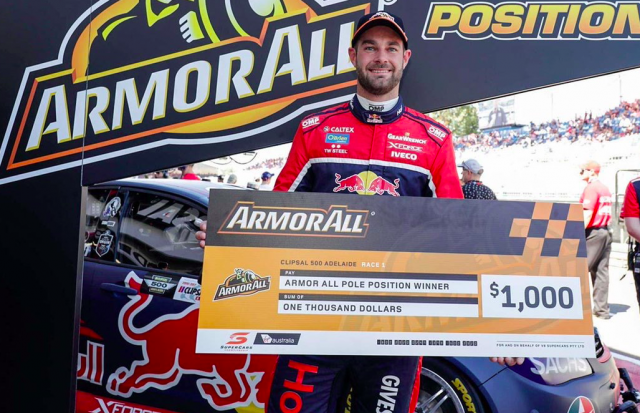 Shane van Gisbergen will start his Supercars title defence from pole position following an impressive performance in the Armor All Top 10 Shootout in Adelaide.

The Red Bull Holden Racing Team driver once again showed his class in a one lap showdown to pip DJR Team Penske’s Fabian Coulthard to pole by 0.04s.

Van Gisbergen, who was last out in the session after topping Saturday’s qualifying session, produced an emphatic new lap record to stop the clocks at 1:19.57s and claim a 16th career pole.

“It was pretty awesome, I knew it was going to be pretty tight,” said van Gisbergen following the lap.

“The track was grippy and the car was awesome and has got better and better as the weekend has gone on.”

Coulthard looked set to take another Clipsal 500 pole having starred in qualifying last year, but was left to settle for second.

Chaz Mostert will head up the second row in the Supercheap Auto Falcon alongside Mobil 1 HSV Racing’s James Courtney, who was the only other driver to lap inside the 1:19s bracket.

Mark Winterbottom set the pace early in the shootout but will start from fifth ahead of Scott McLaughlin, who made a costly mistake on his effort in the #17 DJR Team Penske Falcon.

The opening 250km race of the season is scheduled to start at 1520.