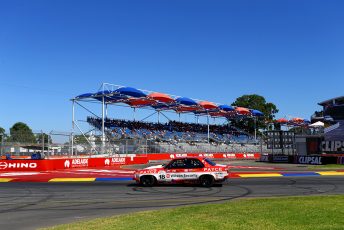 A wrap of the action from the Clipsal 500 in Touring Car Masters, Aussie Racing Cars, Stadium Super Trucks, and Improved Production.

John Bowe is two from two in 2017 but had to work slightly harder for the win after Adam Bressington took the ascendancy early.

The pair rubbed panels going through Senna Chicane the first time, forcing Bowe to jump his #18 Wilson Security Torana over the kerbs.

Bowe passed the Whiteline Racing Camaro up the main straight while commencing Lap 2, and gradually pulled away as he reset his Race 1 lap record on Lap 3.

Bressington was pacey himself on his way to second, with Andrew Fisher (Falcon XY GTHO) third and Mark King (Camaro) fourth.

Steven Johnson climbed to fifth in the #17 WM Waste Mustang after a Race 1 DNF and an off while attacking Cameron Tilley (Pacer) in Race 2.

Jason Gomersall (Torana) finished sixth after a wild mid-race spin at Turn 13, one position ahead of Jim Richards.

The 10-lap Trophy Race will conclude the TCM program at 0940 ACDT on Sunday. 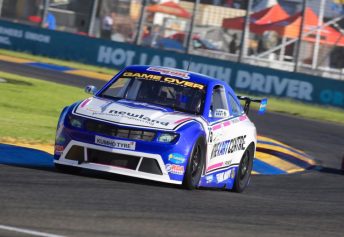 Kel Treseder hit back by taking out Race 3 in Aussie Racing Cars.

Four different drivers led on the opening lap as the Top 15 from Race 2 was reversed on the grid, with Adelaide’s own Luke Fraser eventually taking control.

Treseder, who was stripped of the Race 1 win for a restart infringement, caught the local by the end of Lap 2 and Ben Walsh soon made it a three-way battle for the lead.

Walsh managed to pass both drivers at once at the end of Brabham Straight on Lap 4 of 9, but Treseder continued to go with the Dr Ink Tattoo Removal car.

Treseder passed Walsh at Turn 14 with a lap remaining and held on to take victory in the Kart Centre Perth entry, his sixth in Aussie Racing Cars.

Fraser was a personal best third in just his third start in the category, ahead of Blake Sciberras, Race 2 winner Craig Woods, and Race 1 winner James Duckworth. 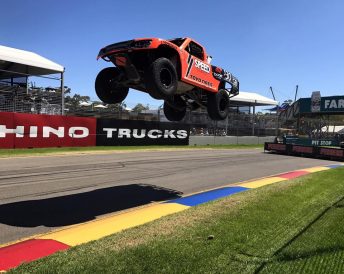 Running third with just over two laps remaining, Brabham lifted onto two wheels through Turn 11 and ended up in the tyre wall, ending his race.

“I was more worried about trying to get out of everyone’s way and get off the track so they could keep racing and not to bring out the yellows, but I was fine.

“Unfortunately, the truck was a little bent up so I couldn’t finish the race but I was ready to keep racing.”

Toby Price led much of the early going after passing Robbie Gordon on the outside at Turn 8, but Creed forced his way past on the penultimate lap.

The final race will be held on Sunday from 1415 ACDT.

Chris Brown completed a clean sweep in his Toyota Sprinter in Race 3, ahead of Myles Bond and Ben Schoots.