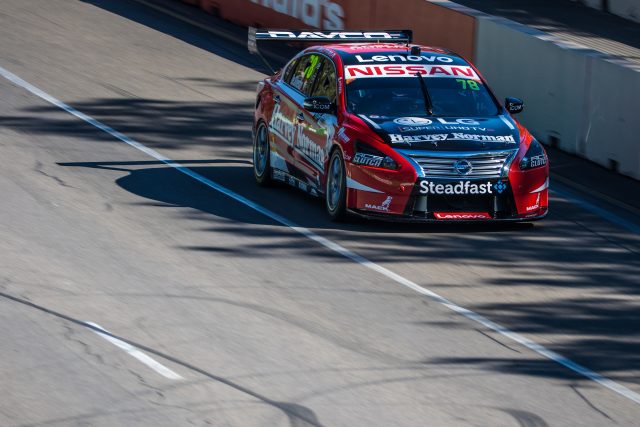 Simona de Silvestro has expressed satisfaction after finishing her first race as a full-timer around the challenging streets of Adelaide.

The new Nissan Motorsport recruit was the last runner to make it home on the lead lap in 20th position after a relatively trouble-free run, except for a late coming-together with the Turn 1 tyre bundle.

De Silvestro had expressed a desire to race rather than circulate in her solo debut, and the Swiss was pleased to be able to battle with her new peers in the 78-lap season opener.

“It was interesting getting a full race under our belts,” said de Silvestro.

“Definitely it’s quite intense out there because the cars are so close to each other and you’re really battling every lap so that was quite cool.

“I really enjoyed it actually, especially at the beginning, and also having Todd (Kelly, team-mate and team co-owner) around, we were being competitive lap time wise.

“I think we need to find a little more speed but I think it was a good day to finish and I learned a lot.”

The 28-year-old also played down the effect of the heat, with temperatures only reaching 31.1C degrees, lower than the 33C experienced during qualifying the day prior.

“It was okay,” de Silvestro explained.

“The last 10 laps were pretty tough, I think, but I feel fine and I definitely think a lot of training helps.

“Everybody was so adamant about how hot it was going to be that I had even more panic in my mind, so I’m glad we’re through it and (I will) hydrate well for tomorrow.”

Fellow rookie Alex Rullo was also chuffed with his efforts in his first ever race in the Virgin Australia Supercars Championship, bringing home an unscathed Commodore in 23rd, two laps off the pace.

The Lucas Dumbrell Motorsport driver highlighted the physicality of the race as his major challenge, having only once raced for as long as the 250km distance, in last year’s Bathurst Dunlop Super2 enduro.

“It was pretty tough,” admitted the 16-year-old.

“I didn’t really know what to expect, obviously I did 250km at Bathurst last year, but there were a lot of Safety Cars and a lot of action there, so I got a few breaks during that.

“It wasn’t anywhere near as hot (as previous days) but here it was really tough.

“It’s probably one of the toughest races of the year for sure and I just got through it, and I’m just happy that I finished and kept it off the walls.”

Rullo nominated ergonomics as his greatest surprise, explaining that he struggled with a numb foot throughout the race in the VF Commodore, which Nick Percat drove to victory in last year’s Clipsal 500.

“Just getting used to the numb foot feeling (was most surprising),” said the West Australian.

“It sort of gives a hot sensation in the foot so that took a bit of getting used to and it’s definitely different.

“That’s something we’ll work on, we’ll adjust the seat position, and hopefully it won’t be as bad tomorrow.

“I got used to it at the end and sort of started picking up my times but it was a little bit inconsistent in the middle.

“I know what to expect for tomorrow.”

The Supercars return for another 78 lap race on Sunday which is scheduled for 1520 local time.