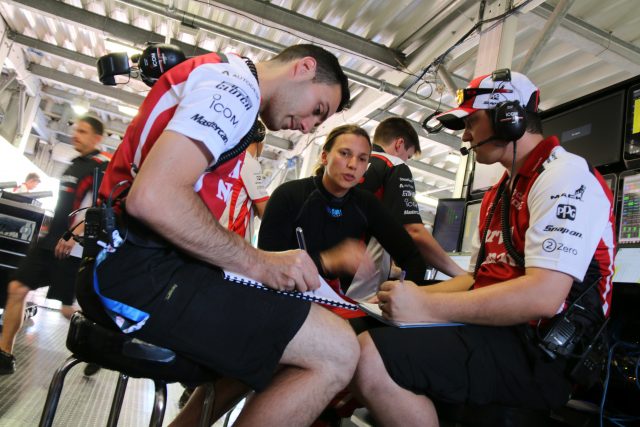 Supercars rookie Simona de Silvestro discusses the challenges ahead of her Clipsal 500 debut.

The former IndyCar driver is set to embark on a maiden season in the Virgin Australia Supercars Championship driving the #78 Team Harvey Norman Nissan Altima.

While the Swiss has already contested two Supercheap Auto Bathurst 1000s as a wildcard in 2015 and 2016, the 28-year-old is now gearing up for the gruelling 250km street circuit races in Adelaide.

De Silvestro will start today’s opener from 24th on the grid. 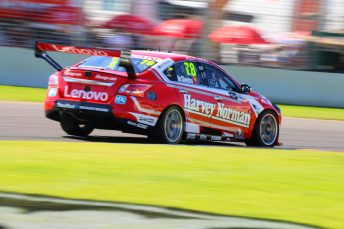 QUESTION: What is it like to drive a Supercar on these street tracks? Do you feel that you’re able to just progress with your learning from Sydney Motorsport Park or is it a bit of a jump to come here?

SIMONA DE SILVESTRO: It’s really different. Sydney is really flowing and maybe it was a bit more natural, like finding the grip in the corner, where here because it bounces around so much more, I think it’s harder to tell really how much grip you have, and that’s kind of what I found  also with the new tyres.

For example, at Sydney I could go and I could just lean on it kind of more like an open-wheel type of car where you know what to expect, you know it’s going to be grippy, but here because you hit the kerbs and you’re landing on the ground much more you just have to trust it, and that’s I think the biggest difference.

QUESTION: Braking confidence in these cars at any track is pretty key, but here the bumps are obviously in quirky areas too. How have you found that?

DE SILVESTRO: It’s quite tricky. The braking is so different and also it’s quite amazing how the braking changes on your fresh tyre and three laps after it changes.

I’ve never had that in my life.  It used to always be the same braking point and you could brake there and it was really consistent so that’s something that I have to kind of learn a little bit how to modulate. 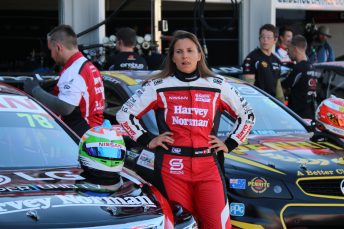 I’ve just got to get to grips with what I have to do and it has to become natural to me.

I think throughout the day it started becoming that (natural) because even when I look at the data, I’m not losing a huge chunk of time somewhere.

I’m getting closer in some sectors I’m actually pretty good so that’s really encouraging but these guys know what to expect, they go out and qualify and know how to put a lap together and I don’t think I’m there yet.

QUESTION: How much do you look at what your other three team-mates are doing and how much of the process is you just gradually feeling comfortable? Can you just look at where Rick Kelly brakes and then try to do exactly the same thing?

DE SILVESTRO: The braking points are really similar, but it’s just more how much speed that they carry over the kerbs, where they go on power.

That’s been my biggest issue, a little bit is the going on power part because they know what to expect from the new tyres so they kind of just go for it. I’m not used to having a car that moves around so much, I’m still thinking ‘Oh, it’s not really there,’ but it actually is.

Looking at it in your brain you see that it is possible and then you just adapt from that and come to the next session. For sure having the data it really helps. 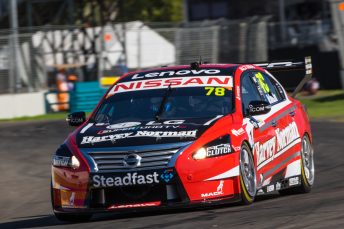 QUESTION: Where does the process of chassis tuning fit into all of that? Are you coming in and saying that ‘We need to do something’?

DE SILVESTRO: A little bit. I still think there is quite a lot of lap time just in myself and I think that the car is pretty good, the base setup is pretty good.

I think to really develop the car, I really have to be at the point where every lap I’m really consistent in my inputs, and I’m not quite there yet.

There’s no point in trying to change the car at the moment with 50 different changes because if you’re not knowing exactly what you’re doing every time and you can’t also do it every time over and over again, there’s no real point in changing the car.

QUESTION: How are you working with engineer Blake Smith? How much of his knowledge have you been able to use to try and get on top of things?

DE SILVESTRO: It’s huge. I really like working with him. He makes me feel really comfortable when he is explaining things.

When we do a change, he’ll explain to me what we’re doing because it’s so new to me. 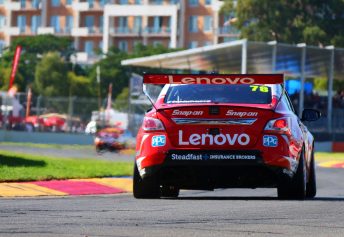 In IndyCar I knew exactly what we could do because I’d been driving open-wheel for 10 years so I know what to expect, but here with him he’s explaining a lot.

He’s really calm as well so I think I’m the one that gets frustrated more quickly but I think we’re a really good team and the whole team is really, really supportive and that really helps because you know you’re there and I want to improve and they’re also giving me the tools to do that.

QUESTION: You said earlier that Adelaide reminded you of IndyCar with some of the street circuits you’ve been on. How much can you draw on that this weekend?

I’ve always loved them when I was driving IndyCar but like I said this car is just such a different animal that it doesn’t feel the same to me.

But in general the track is cool and I just have to find the way how to drive this car on a track like this.

QUESTION: Heading into the race, how do you approach it?

DE SILVESTRO: Yeah, it’s a race, you want to be competitive and you want to make passes and stuff.

I wouldn’t be really close to cars yet because at Bathurst we were kind of racy a couple of times at some stages of the race, but this will be a big practice to get that under my belt and be racy, for sure.

You don’t want to go out there and just try stuff, you have to drive it and you want to go and move forward some positions. 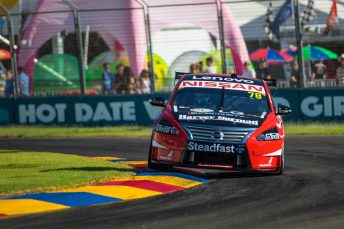 QUESTION: The car-to-car combat is really going to be something that’s almost new in the race itself?

DE SILVESTRO: That’s the biggest thing I’ve been kind of thinking about over the winter as well.

It’s just going to be the first time out here and we have to try it out and that’s it and how it is.

QUESTION: Just also with that car-to-car combat stuff, have you actually watched a lot of the races and tried to absorb not only how the cars handle, but how each driver approaches it, or do you just get in there and see how it goes?

DE SILVESTRO: For sure, every driver has their own characteristics but it’s always different and you never know how they are around you, you know? It’s something that I’m going to have to explore tomorrow.

It’s going to be a little bit crazy out there but hopefully we have good pace and we actually can be fighting.

I think we are because our lap times are pretty close to a lot of cars, so I think we’ll be racy and that’s what’s important, hopefully we can also make some passes because that’s the stuff you want to learn as quickly as possible.