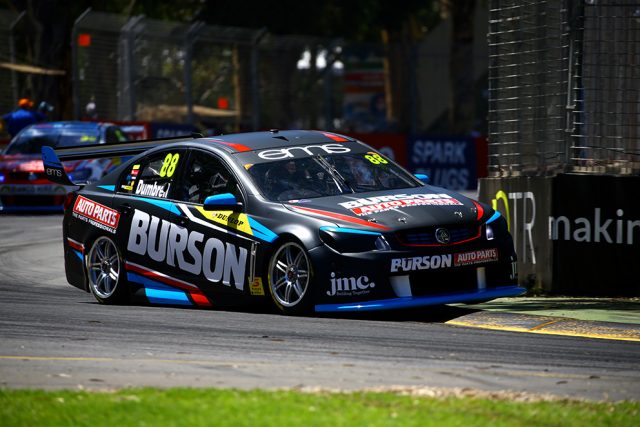 Paul Dumbrell has ensured that Todd Hazelwood continues to hunt for his first Dunlop Super2 Series victory by taking two from two victories at the 2017 Clipsal 500 this afternoon.

While Dumbrell would take the win, it was Hazelwood who took the start advantage – getting the jump on the Burson Auto Parts pilot to lead until lap nine, when the veteran was able to execute a move up the inside of the youngster on turn nine before holding him out through a side-by-side battle through turns 10 and 11. 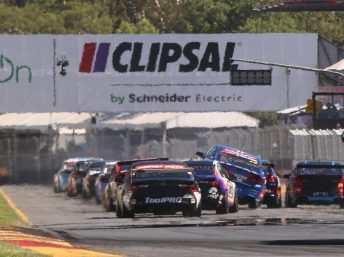 From there ‘PD’ would control the race to finish ahead of Hazelwood and third-placed Jack Le Brocq, who kept Hazelwood working hard all the way to the flag. Macaulay Jones and Andrew Jones rounded out the top five ahead of Will Brown – whose sixth place result is impressive given the former Formula 4 and Toyota 86 racer is on debut this weekend.

The 17 lap stanza got off to a dramatic start to say the least. While the battle for the lead kicked off in exciting fashion, it would continue for only a few seconds before the field came under the control of the Safety Car as officials rushed to attend to the heavily damaged #21 SCT Logistics Brad Jones Racing Holden VF of Jack Smith

The #21 had stalled on the grid and suffered a large impact from #15 Auto One Matt Stone Racing pilot Adam Marjoram, who had nowhere to go. Neither racer would take any further part and Marjoram has been confirmed as being out for the rest of the weekend.

“I pulled up at the line and loaded the clutch up a little bit too much and it sort of cooked itself,” a dejected Smith explained.

“I lost the clutch and it jumped forward a bit and unfortunately stalled.

“It is a really unfortunate event for me, I am not sure who hit me but I really wish it didn’t happen, it is a shame.”

Despite the significant damage to the BJR car, Smith stated that he believes the team will be able to get it fixed ready for tomorrow’s race.

On the restart, the field got away clean with Hazelwood leading Dumbrell, Richard Muscat, LeBrocq and A.Jones.

The battle for the lead was on right from the get-go, with Dumbrell right up on the back of Hazelwood as the Bigmate Racing driver held his own and Muscat, M.Jones and Le Brocq battled for position behind them, with Le Brocq getting through on Jones for fourth before going on to chase Muscat for third. This battle would come to a premature end on lap 7, when Muscat slowed dramatically to enter the pit lane with an engine misfire. At the same time, Bryce Fullwood drew gasps as he got wide and went out onto the grass to drop down the order to 19th after having been inside the top ten.

Drawing the ire of the stewards was Anton de Pasquale, with his contact with Josh Kean and his Wynn’s ProDrive Racing FGX on lap 7 seeing him served a five second penalty.

Joining Marjoram and Smith in being classified as DNFs was Shae Davies, who on lap 13 found took himself out of the race by retiring in a safe place in the turn four escape road with apparent issues. He had been running comfortably inside the top six up until this point.

The third and final race for the Dunlop Super2 Series will be held tomorrow (Sunday) at 11:25.