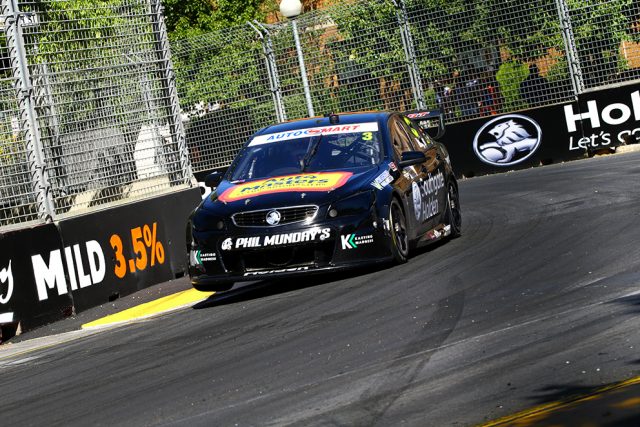 Douglas ended the race last (24th), 15 laps down on the podium finishers, after a cool suit problem forced him into the pits and into an ice bath.

The team, who called 33-year-old Douglas in for a one-off drive at Clipsal to avoid a fine from race organisers, fought to fix the problem as Douglas cooled his core temperature.

“I felt my body heating up and the biggest indicator was my times dropping off, I just didn’t want to crash the car which is easy to do around here,” Douglas told Speedcafe.com.

“I didn’t like doing it, I wanted to push but I knew I hadn’t had the ideal lead-up as well, we had to fix it, I said if they fixed it I’d get back out there and finish.

“When we plugged it in on the grid it didn’t seem to be cooling down but we thought it was just because it had only just been plugged in.

“I started the race, we pressed on, it just wasn’t working – if it was a kink in the line or the pump I don’t know – the boys popped the window out and I thought it might help but I think I was already done.”

The Prodrive pilot suffered cool suit problems as well as one-sided radio traffic with his pit crew, but said he finished the race in better shape than some.

“I could hear them but they couldn’t hear me, I was saying that I feel fine and not to worry, I felt fine, but it was pretty warm,” Bright told Speedcafe.com.

Bright said he had suffered through hotter Clipsal 500 races with inferior in-car cooling but brake balance problems put him out of contention.

“If I was in the heat of a battle all day, which I probably was back then, it would have been a much tougher day,” he added.

“Once I was out of contention, we were struggling so much I just wanted to make sure we finished.

“I thought we’d made some ground on it this morning but in the race it was swapping around, locking rears and then fronts, I couldn’t find a good balance.

“We just need to have a good look at everything and figure out what’s going on, I can’t believe it’s just a driving style thing, it’s too much of a problem I feel for it to be driving style,” he said.