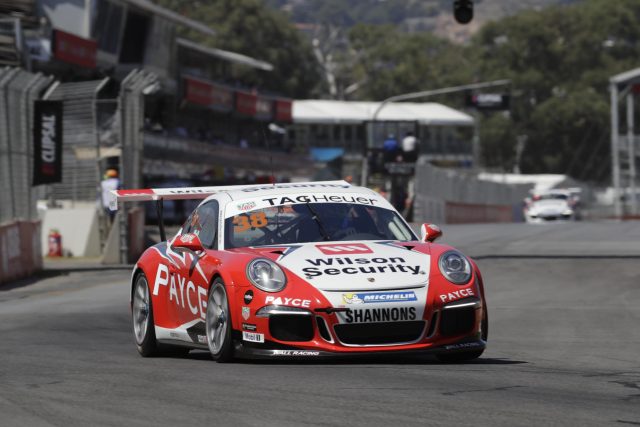 David Wall has used a great start to complete a controlled victory in the second race of the Carrera Cup in Adelaide.

Wall out-dragged Race #1 winner Andre Heimgartner off the line and despite some pressure in the early laps, that was relieved when the young Kiwi spun on lap #10.

From that point Wall was unchallenged through to the finish with Cameron McConville claiming second ahead of Heimgartner.

Wall’s race was steady, while others were involved in plenty of action. Alex Davison had his race end after Jaxon Evans tagged the right-rear of his Porsche while battling for third on lap #8. Davison got back to pit lane, but soon retired. Evans would go onto finish in sixth.

James Abela got into fourth place and was soon leading a train of cars back to German Lars Kern in eighth.

Michael Almond then got side-by-side with Nick McBride and contact on the exit of Turn #4 saw the tyre popped from the wheel of Almond’s machine. He then went across the track into the path of Kern with both cars eliminated on the spot.

Stephen Grove took the victory in the Tag Heuer Carrera with an eighth place finish overall.