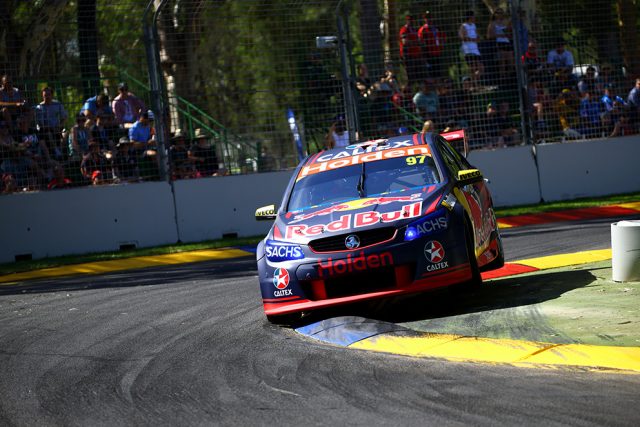 Shane van Gisbergen edged Scott McLaughlin by the narrowest of margins in the opening qualifying session of the 2017 Virgin Australia Supercars Championship.

The Red Bull Holden Racing Team saved his best until the dying minutes to post a record 1:19.78s effort which was one ten thousandth of a second faster than DJR Team Penske’s McLaughlin.

“The car was not good this morning but we really worked at it, the car is awesome and pretty fast on this new tyre, I am really liking it,” said van Gisbergen.

“It is not pole yet, but we are in the shootout and feeling really good.

“It is definitely (game on), I followed Scotty’s car earlier today and it just looks like one of ours, obviously Ludo has plugged a bit of that set-up in, but, they are doing really well, they are up there and we expect them to be.

“It is good to have great competition and fighting hard for it.”

The full grid for the opening race of the season will be determined by Saturday’s Top 10 Shootout held at midday local time.

Rick Kelly was among a group of drivers to make the most of final runs to leap up to third ahead of Mobil 1 HSV Racing’s James Courtney.

Prodrive Racing’s Chaz Mostert climbed up to fifth in the dying minutes in front of fellow Ford runner Fabian Coulthard.

Jamie Whincup had struggled for pace early in the session but the six-time champion managed to secure a spot in the top 10 shootout in seventh.

A number of notable drivers missed out on the shootout including Craig Lowndes, who was 13th behind Brad Jones Racing duo of Nick Percat and Tim Slade.