Scott McLaughlin produced an impressive display to top an interrupted second practice session at the Clipsal 500.

A flurry of quick times in the final minutes of the session saw Rick Kelly pop up into second spot just 0.08s shy of McLaughlin.

Kelly’s effort demoted 2016 champion Shane van Gisbergen, who was only the third man to log a time inside the 1:19s bracket.

His time came after the Red Bull Holden Racing Team driver suffered a spin at Turn 7.

After topping opening practice, Jamie Whincup produced a gutsy lap late in the session to move to second, although the six-time champion dropped fourth at the chequered flag.

The session was red flagged just before the halfway mark when teenager Alex Rullo found the tyre wall on the exit of Turn 5. 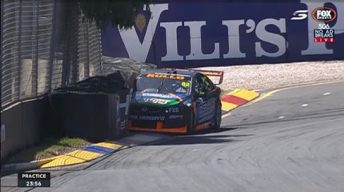 Rullo appeared to lock a rear wheel before sliding into the barriers which required a recovery vehicle to retrieve the car.

The teenager started the session with a five minute penalty for crossing the control line twice at the end of opening practice.

Rullo was able to return to the track later on in the session, completing 17 laps in total.

Nissan Motorsport’s Todd Kelly was fifth fastest as the Braeside squad continued its impressive start to the season.

Craig Lowndes’ quiet start to the Clipsal 500 continued with the Triple Eight driver 21st on the timesheets.

“The car feels good. I think we got through our program, made our adjustments,” said Lowndes.

“We set a couple of good times but from what they tell me we must have triggered the turn one kerb, so we will have a look at that. Everything’s going really well at the moment.

“We were P21 in the first session, we thought we didn’t quite get the balance right but we worked really well in that session and got it right.

“We will have a look at the data and have a look at where we are, but we posted a couple of good times, we just have to get through turn one better.”

The Supercars field will return for 20 minute qualifying session at 1430 local time.