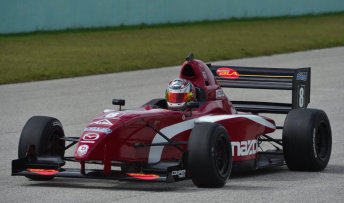 Kalgoorlie’s Anthony Martin will step up to the Pro Mazda Championship this year with Cape Motorsports.

Martin continues with the St Petersburg-based team off the back of winning seven races on his way to the 2016 USF2000 Championship title.

The 22 year old thus earned a $363,000 scholarship which will see him move up to the next rung on the Mazda Road to Indy ladder.

“Going with Cape Motorsports again was a quite easy decision,” said Martin.

“They’re a great team, and everything they have is second to none. I witnessed it all of last year, and I could not leave the team because the way they run the show is impeccable.”

“We had a great year with Anthony in 2016 and we saw him grow as a driver into a true champion,” Cape said.

“We feel confident that he will bring the momentum of his success in the USF2000 series into Pro Mazda.”

Pro Mazda is the second of four rungs in the Mazda Road to Indy ladder, with Indy Lights and the IndyCar Series above.

The opening round of the feeder category supports the IndyCar Series’ Grand Prix of St Petersburg from March 10 to 12.