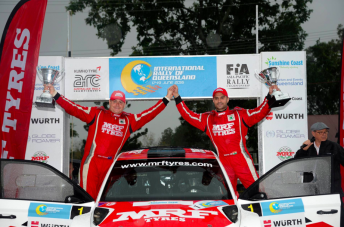 The International Rally of Queensland has been cancelled

The Confederation of Australian Motor Sport has confirmed the International Rally of Queensland has been cancelled.

The 2017 running of the event, scheduled for late May, was described as not being ‘financially viable.’

The Australian championship reverts to a five-round series which gets under way with the Eureka Rally in Victoria later this month.

CAMS motorsport event general manager Michael Smith said it was unfortunate for the event to be cancelled, however plans are underway to find a future host for the Australian round of the APRC.

“We appreciate the tremendous support from the Sunshine Coast Regional Council, Tourism Events Queensland and the army of volunteers that have worked so hard over the years,” Mr Smith said.

“CAMS will now work with the Asia-Pacific Rally Championship Working Group to find a new home and promoter for the event for 2017 and beyond.”

Next Story Canberra to host Asia Pacific Rally round