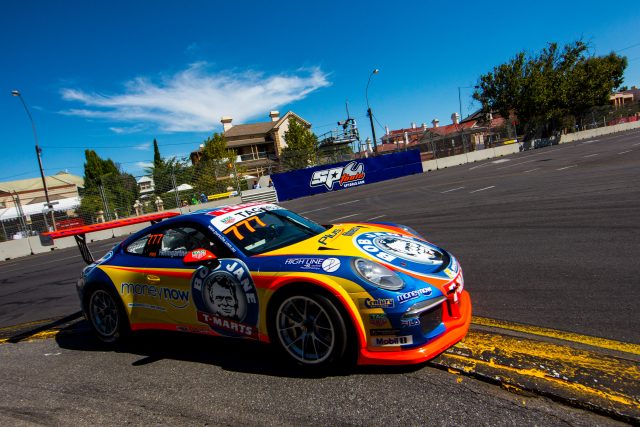 Andre Heimgartner has backed-up his pole position with victory in the opening race of the Carrera Cup season on the streets of Adelaide.

Heimgartner had to fight-off his Sonic Motor Racing Services team-mate Nick McBride at the opening chicane before the duo had a tight battle at the front over the opening laps.

A seven-car train headed the field as David Wall sat in third place while German driver Lars Kern pressed at the rear of the group.

On lap #12 Kern’s race came to an end when he lost a right-rear wheel and tagged the fence at Turn #10. The incident left debris on the track and a lap later Michael Almond clouted a tyre on the racing line at the same spot and damaged the radiator taking him out of fifth place.

The action then continued at the head of the field when McBride spun and tagged the fence. He would go onto finish in eighth.

Up front Heimgartner was then under pressure from Wall over the closing laps. He did enough to hold-on and take the race win.

In the Tag Heuer Carrera Challenge Stephen Grove endured race-long pressure from Marc Cini, but kept his nerve to win the semi-professional category.

The second race of the weekend for the Carrera Cup will be held tomorrow at 2.05pm local time.

VIDEO: Heimgartner, Evans and Grove speak after the opening race