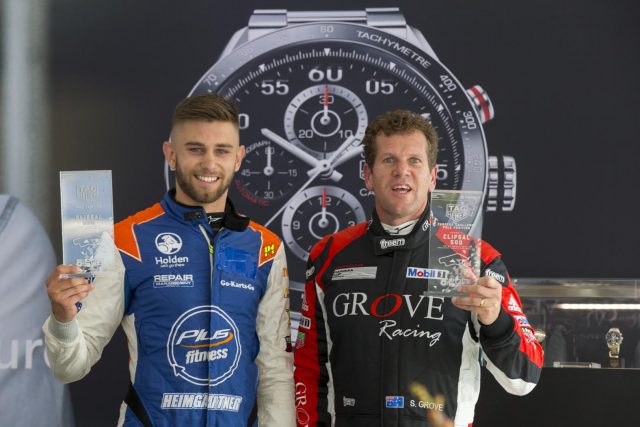 Heimgartner and Grove with their Tag Heuer Pole Awards

Andre Heimgartner has marked his return to the Carrera Cup in style with pole position for the opening race of the season on the streets of Adelaide.

Heimgartner, who has not driven in the Carrera Cup since 2012, only sat in the Type 991 Cup Car for the first time yesterday as he led a Sonic Motor Racing Services lock-out of the front row with Nick McBride.

Also turning heads was Jaxon Evans, who on debut in the main Carrera Cup series set the third-fastest time ahead of Alex Davison.

It had been anticipated that track conditions would favour fast times. However, being the first cars on the circuit this morning the quick times only came towards the end of the season as the Michelin rubber came up to temperature.

In the Tag Heuer Carrera Challenge Stephen Grove took the award ahead of Marc Cini.

The opening race of the Carrera Cup will be run over 20-laps at 3.05pm local time.