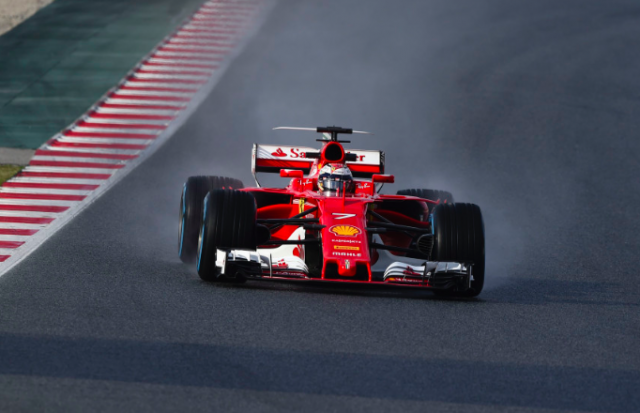 Kimi Raikkonen put Ferrari on top of the timesheets on the final day of the opening Formula 1 pre-season test at Barcelona.

The simulated wet conditions only lasted for an hour limiting the amount of wet tyre running with Raikkonen and Red Bull’s Max Verstappen among the runners to test the new rubber.

However, once the track dried it was Raikkonen who set the pace with a 1:20.872 while running the soft tyres.

“We are pretty optimistic every year, but then how it turns out at the end of the year is hard to say,” said Raikkonen.

“I think we learned our lessons from the past years. The team has done a good job over the winter and if it’s good enough we will see during the year.

“So far it’s been a good feeling, so we can’t complain too much. Compared to last year it feels a lot better, but it’s because of the rules.

“We have been doing our own stuff and we are happy with how things are going.”

A late run from Jolyon Palmer put Renault third as the Brit lapped within a second of Raikkonen after taking over from Nico Hulkenberg.

The issue prevented Lewis Hamilton from any running in the morning.

Team-mate Valtteri Bottas did however complete 68 laps in the afternoon although the Brackley squad elected to end his day early.

Haas F1’s encouraging test ended with Romain Grosjean emerging in fourth ahead Sauber’s Antonio Giovinazzi, who is filling in for Pascal Wehrein.

Sergio Perez put Force India in sixth while McLaren were seventh after Stoffel Vandoorne managed to record 67 laps in the MCL32.

It proved to be a disastrous day for Toro Rosso who completed just one lap with Daniil Kvyat at the wheel.

The Red Bull sister squad underwent an engine change in the morning but the car failed to appear for the remainder of the day.

Meanwhile, Williams was absent from the final day due to significant damage caused to the FW40 by Lance Stroll.

The second F1 pre-season test begins at Barcelona on Tuesday.