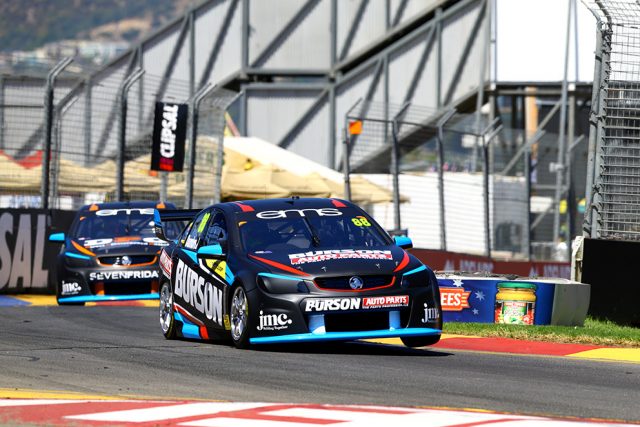 Paul Dumbrell has claimed the Armor All Pole Award in the Dunlop Super2 Series in what was an incident marred 20 minute qualifying session.

“It is good to bounce back after what was a bit of a tough end to last year missing the last race,” Dumbrell said.

“To have a new car and Burson Auto Parts on board as well has made a great weekend so far and hopefully we can continue it.

“The shoulder is a bit sore, I won’t lie to you – I don’t think I have ever been built that strong so my little bicep is a bit sore,” he laughed, before continuing “but it will be fine all weekend.” 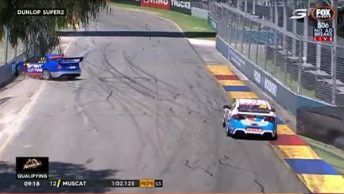 Two red flags were flown, the first for Brodie Kostecki who clouted the wall on the exit of turn 11 in the #57 Sprint Cutting Matt Stone Racing Ford Falcon FG at the 8 minute 42 second mark, spearing across the road and into the opposite tyre wall as a result.

After 12 minutes the session would resume, only to see local yellows called for almost immediately when an errant wheel made its way  down the road at turn eight after having parted company from the #38 Eggleston Motorsport Holden VF. Driver Will Brown was forced to park up on the escape road towards turn nine.

Moments later, after having topped the session for the majority up to that point, Dumbrell improved his fastest time to a 1:21.8356s lap as the majority of the field around him pushed for fast laps before the second red flag flew to bring the session to an end and disrupt their efforts. 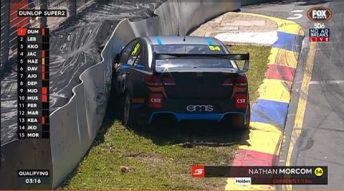 Nathan Morcom in the fence at turn four

This time, the red flags were flying for Nathan Morcom, who had buried the #54 Eggleston Motorsport Holden VF deep into the tyre wall at turn four.

Managing to get in quick times before the session was called were Kurt Kostecki and reigning champion Garry Jacobson who both made big moves up the sheets, jumping 14 and 8 spots to be third and fourth fastest respectively.

By virtue of their red flag causing adventures, both Brodie Kostecki and Nathan Morcom lost their fastest laps of the session and were unable to return to the track.

The Dunlop Super2 Series will return to the track at 16:25 for its first race of the weekend.

Previous Story Penalty to P1 for Hazelwood in Super2