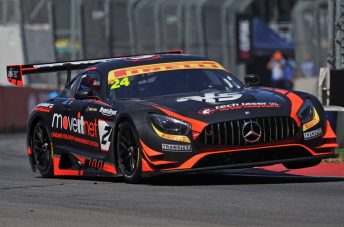 Tony Bates has celebrated his debut as an Australian GT full-timer with a maiden victory in Race 1 at the Clipsal 500 Adelaide.

Van der Linde led the field away from pole position but there was immediate carnage when Quinn’s McLaren turned right through Senna Chicane, clipping Max Twigg (#8 Mercedes) and finishing in the wall.

With Quinn managing to clear the #7 Darrell Lea entry from the circuit, van der Linde put three seconds on the field on the opening lap.

He broke the lap record of the man who he replaced at Jamec Pem, Christopher Mies, on Lap 4, and had the #74 Audi five seconds clear when second-placed Nathan Antunes lost control of his R8 and hit the wall exiting Senna Chicane. 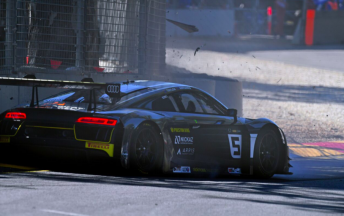 Van der Linde set about gapping Ash Walsh when the green flags flew on Lap 7, but was forced to serve a drive-through shortly after for weaving after the Safety Car had pulled away, dropping to 12th.

Walsh continued to lead in James Koundouris’ Supabarn Audi until the compulsory pit stop window, after which time Tony Bates (#24 Mercedes) took control of the race by virtue of a short CPS time (50s).

Roger Lago (#23 Lamborghini) shook off the threat of Peter Major (#14 Lamborghini) for second shortly after the pit stops cycle, but could not make any serious inroads on Bates’ seven-second lead.

The front of the field remained largely unchanged as the 38-minute race drew to a conclusion, with Bates, Lago, and Major making up the podium, ahead of Liam Talbot (#911 Porsche) and Tony Walls (#11 McLaren).

Geoff Emery gained a place in the #74 Audi to finish 13th, after van der Linde had handed the car over while on track to lower the lap record again.

Steven Richards/James Bergmuller were 16th after the four-time Bathurst 1000 winner started from pit lane due to pre-race issues with the #100 BMW.

Australian GT returns to the track for another 38-minute race tomorrow from 0910 ACDT (0940 AEDT).