Penalty to P1 for Hazelwood in Super2

Penalty to P1 for Hazelwood in Super2 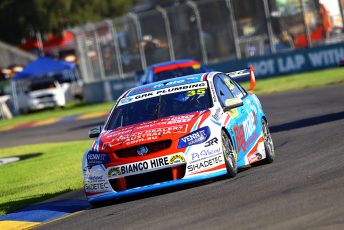 Todd Hazelwood may have started the second Clipsal 500 practice session of the Dunlop Super2 Series sitting idle in the pits, but he ended it on top of the time sheets thanks to a 1:22.4329s lap.

Hazelwood languished in the pit lane for the opening five minutes of the session as the rest of the field took to the track, as punishment for crossing the control line twice after the checkered flag flew on this morning’s first practice session for the series.

Deemed to have taken a competitive advantage, Hazelwood was docked the time rather than being given a fine. However, it wasn’t enough to stop him making the most of the session, with his sheet-topping time coming amongst a flurry of hot laps to set the top five in the final moments.

Defending champion Garry Jacobson was sixth fastest (1:22.9049s) ahead of Jack Perkins who until the very final moments of the 30 minute session was on top with a 1:22.9376s effort.

Suffering complications this afternoon were Renee Gracie who lost the right front wheel from her Holden on the approach to turn eight, and also Shae Davies who suffered a puncture after locking a brake to make contact with the tyre wall. Both drivers would make it back to pit lane under their own power for attention before returning to the circuit, finishing 18th and 19th fastest respectively.

The Dunlop Super2 Series field will return to the Adelaide Parklands circuit tomorrow (Friday 3 March) for qualifying at 13:20 followed by race one at 16:25.