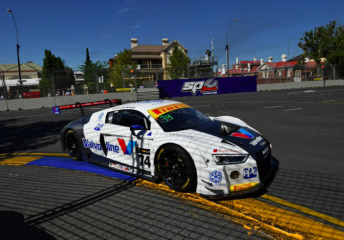 Van der Linde, who will partner the returning Geoff Emery, surged to the top of the time sheets with a 1:20.45s in the final stages of the 20 minute session.

The grid is determined by the fastest times posted from the two 20 minute sessions with the final session scheduled for later this afternoon.

Walsh was among a group of drivers including Nathan Antunes (#5 Audi) and Come Ledogar (#59 McLaren) who enjoyed brief spells at the top the time sheets.

Antunes ensured the top three positions were filled by Audis after ending the session a tenth further back from Walsh.

Works McLaren driver Ledogar was fourth in the 650S, he is driving with Fraser Ross, while Dean Canto was fifth despite a wild spin at Turn 1 in the Trofeo Motorsport Lamborghini Huracan.

The Tony Quinn McLaren 650S sat out the session after sustaining damage in practice.